House panel chairman says Crist must have been misled 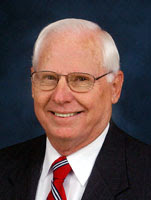 A "pretty darn upset" Rep. Ralph Poppell said Wednesday he thinks Gov. Charlie Crist was misled by an aide into vetoing his bills dealing with petroleum contamination sites and yard waste in landfills.

HB 1385 would have allowed the owners of 4,985 contamination sites to remove them from the state cleanup list if they do not pose a threat to drinking water supplies. In his veto letter, Crist wrote that the legislation "ties the hands" of cities and counties while directing the Florida Department of Environmental Protection to set less protective standards for cleaning up sites. He also said the bill also directs the state to divert $10 million from dangerous sites toward the cleanup of less dangerous sites.

But Poppell, R-Vero Beach and chairman of the House Natural Resources Appropriations Committee, said the bill didn't require any money to be spent on low-risk sites. Poppell also said the bill included language suggested by cities and counties and that DEP supported the bill.

"The person who recommended this (veto) to the governor should be fired," Poppell said.

During the session, a DEP spokeswoman said the department was working closely with Poppell and that the goal of the bill "is to improve the overall effectiveness of the program by implementing measures that will reduce costs and increase efficiency."

Jim Smith, president of the Florida Marketers & Convenience Store Association, said his group supported the bill and hopes the Legislature will override the veto if a special session is held.

HB 569 would have lifted the state ban on yard trimmings in landfills in which gas from decaying waste is used to produce renewable energy. Unlike the tanks bill, there was environmental opposition from Sierra Club Florida, the U. S. Composting Council, Hillsborough County and the Southern Alliance for Clean Energy. They said yard waste could be put to beneficial use as compost. A DEP representative said during the session that the department was neutral.

In his veto letter, Crist said the bill represents a "step backward" for recycling in Florida. Poppell said Wednesday the opposition to HB 569 represented a "turf war" in the waste industry than a legitimate environmental issue. "I think the governor was sold out," Poppell said. "I can't picture him just signing this (veto letter)."

A spokesman for the governor was flying with Crist on Wednesday and was not immediately available for comment, according to the governor's press office.

June 3 additional notes: Representatives of the Florida Association of Counties and Florida League of Cities said they did not request vetoes of HB 1385.
Green Florida, a group that promotes community gardens, praised the veto of HB 569.