Future of state growth management in question under new department 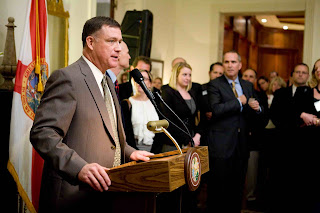 Doug Darling, executive director of the Department of Economic Opportunity

SB 2156, signed into law by Gov. Rick Scott on June 14, abolishes the Florida Department of Community Affairs and transfers its planning division to a new Department of Economic Opportunity by Oct. 1.

Coupled with other growth law changes, some environmentalists have worried that the department's development mission will trump state laws designed to curb urban sprawl and protect communities and natural areas.

In an interview earlier this month, Darling said the new law changes placed growth decisions in the hands of local government while the state's role is to focus on large-scale land-use planning.

"So what I believe will happen on a local comprehensive plan amendment or something like that unless it is an area of critical state concern, the state will not weigh in," Darling said.

The law changes also call for the state to get involved in areas of "significant" state resources. Environmental group representatives argue that it's unclear what those resources are because they have not been identified.

Charles Lee, Audubon of Florida's director of advocacy, said in June he's concerned that decisions by planners to challenge development projects may get overruled in the new department.

"Will it [growth management law] be rendered nonfunctional by pressure from the top of the Department of Economic Opportunity?" Lee said.

Darling says if the former DCA planners say a development is a bad idea, then "I think I will act much like any other agency head who takes staff recommendations and who perhaps has sometimes a different perspective on things."

"Maybe they are focusing on one thing too much, or I may absolutely support them," he added "I will take it on a case-by-case basis."

A transition team progress report on Aug. 15 lays out the organizational structure of the new department. A consultant's report issued Aug. 19 discuss recommendations for the new department to help businesses create jobs.

There is little discussion of the new department's growth management role in an 82-page consultant's report beyond mention of programs and responsibilities on pages 54-55.

In his earlier interview, Darling said he doesn't see economic development and growth management as being in conflict.

"Our growth management has always included an economic development element," he said.

Lee said this week that Darling's appointment was good because he has an environmental background as former inspector general of the Florida Department of Environmental Protection.

But Lee also said the question remains whether growth management will survive within the department. The culture of the department, as established by Darling, will be the key factor, Lee said.

"We will probably have some early tests where the (former) Division of Community Planning is in a position to do something and either does or doesn't," Lee said. "And some resources will be either protected or sacificed because of that."