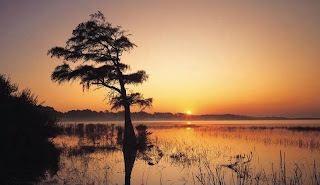 With the stroke of a pen last month, Gov. Rick Scott turned Florida from a conservation land-buyer to a land seller.

Florida had the largest land-buying program in the nation with more than 2 million acres purchased since 1990. The Florida Forever program received $300 million a year until state revenues started slipping in 2009, when the Legislature appropriated nothing for the program for the first time since 1990.

Last year the Legislature found $15 million for the program. But the outcome for even that meager amount looked bleak this year until Sen. JD Alexander came up with a novel proposal -- that state could buy more land if it sold some of its existing property.

Alexander, the powerful chairman of the Senate Budget Committee, proposed allowing the state to spend up to $305 million for land if it could sell that much, which was highly unlikely. The Florida Department of Environmental Protection already had identified more than 20,000 acres that can be sold and has put several small parcels up for sale on the department's web site.

Environmental groups went along with the proposal, reminding legislators that the state Constitution allows land to be sold only if the Cabinet determines it is no longer needed for conservation purposes.

But none of that seemed to matter to Scott when he raised his veto pen and displayed it before a crowd at The Villages in Central Florida.

That $615 million included $305 million for Florida Forever even though it was unlikely that anywhere near that much land could be sold in one year. So Scott killed the possibility of new funding for land acquisition while he directed that the money he vetoed go towards education.

In his veto message, the governor said the state can't afford to buy and manage more land -- echoing critics such as Associated Industries of Florida and the Florida Farm Bureau. However, supporters point to polls that show overwhelming support for land purchases and studies that suggest parks, state forests and other public lands contribute jobs and spending for the economy.

While Scott has said he likes visiting parks to hike, he has never said anything in favor of new land purchases even while approving a few deals at Cabinet meetings with the cash previously appropriated by the Legislature.

Scott said any spending that is eliminated by his veto pen should go towards education. But House Speaker Dean Cannon said the money instead would go into state reserves.

That would seem to put the nation's largest land-buyer in the position of now being a land-seller. But some environmentalists, such as Audubon of Florida's Eric Draper, say that can't swallow that idea.

"Some land will get sold, some land will get surplussed, some parks will get developed," Draper said. "But I don't think the people of Florida are going to completely go along with that. Rick Scott is not a king. Florida is still a democracy. People still have a voice."