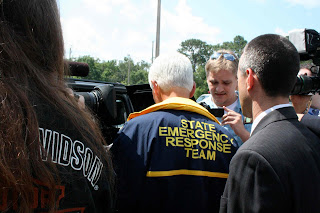 To view AP photos of the oiled wildlife published by the Boston Globe, click here.

Gov. Charlie Crist on Thursday asked BP to provide the state with $50 million to cover emergency response efforts to the oil spill in addition to $25 million earlier provided by the company.

In a letter to BP America President Lamar MacKay sent Thursday, Crist said $30 million is needed on supplemental protective measures and $20 million for emergency preparedness during the first 30 days since the spill began April 20 and for an additional 30 days

McCollum sent a letter to U. S. Attorney General Eric Holder reiterating his disappointment that Holder doesn't plan to meet with McCollum and state officials. McCollum went on to state that there was no clear federal contingency plan to address a deep water drilling accident.

"From the moment of the Deepwater Horizon explosion on April 20, your administration has demonstrated a lack of competency is managing this disaster," McCollum wrote. A Department of Justice spokesman said McCollum was never told that department officials did not want to meet with him and that McCollum refused to meet with an assistant U. S. attorney general.

Sink wrote a letter to BP CEO Tony Hayward asking him to attend the June 8 Cabinet meeting and expressing frustration with the company's response to the oil spill.

"Florida's leaders have been more than patient with BP and what do we have to show for it?" she said. "Thousands of tar balls from the Deepwater Horizon oil spill are now less than 10 miles off of our beautiful Northwest Florida beaches." BP officials did not return a call to their Houston press office seeking a response.

Nelson said he is continuing to insist that the White House bring in the military to respond to the spill -- even though the U. S. Coast Guard, a military branch, is coordinating the spill response. A spokesman for Nelson said the senator wants the Pentagon more directly involved.