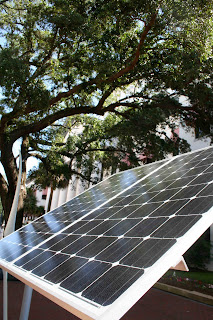 Florida failed to use federal money to create jobs and, instead, targeted dollars to an energy rebate program, according to a critical federal report released earlier this month.

Florida was allocated $126 million from the U. S. Department of Energy under the American Recovery and Reinvestment Act of 2009 which was supposed to be targeted either to new projects or to expand existing projects and create jobs. Instead, Florida, with DOE approval, used about $8.3 million to pay down a backlog of claims from 2008 for a popular solar rebate program, the inspector general reported.

The solar rebate program, which has run out of money and is set to expire on June 30, pays up to $20,000 for home solar panels and up to $500 for hot water heaters. Paying the rebates with federal stimulus dollars was inappropriate because it did not advance the underlying purpose of creating or saving jobs, according to the DOE audit. After directing the $8.3 million toward the initiative the program still has a $35 million backlog in rebate applications.

The inspector general also found that Florida was unable to carry out a plan for allocating other federal stimulus dollars by Jan. 1 because some projects were ineligible and required lengthy review under the National Environmental Policy Act.

The DOE inspector general faulted the federal agency for insufficient monitoring of the state. A department assistant secretary concurred with the findings and stated that department would provide additional oversight of Florida.

Robert S. Vickers, director of the Governor's Energy Office, said the federal government gave the state approval to spend the money on the rebate program. He also said the solar rebate program continues to encourage growth of the state's economy and its solar energy industry.

(Story provided by The Florida Tribune. Story and photo copyrighted by Bruce Ritchie and FloridaEnvironments.com. Do not copy or redistribute without permission, which can be obtained by contacting brucebritchie@gmail.com.)
Posted by Bruce Ritchie at 6/14/2010 10:37:00 PM

No it's a much better idea to let the whole 4 billion dollar solar industry die in this state by not providing any state incentive. These people don't need to employed. Let's let BP drill a few more deep wells off the coast. I personally am leaving the state and moving to NC which has some renewable energy incentives.