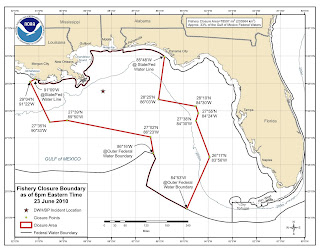 Florida Department of Environmental Protection Secretary Michael Sole is asking NOAA to scale back the federal waters in the Gulf of Mexico that are closed to fishing.

On Wednesday, there were 78,597 square miles of the Gulf of Mexico closed to fishing. That's an area larger than Florida and 34 other states but it represents only one-third of federal waters in the Gulf. Sole this week asked the NOAA Fisheries Service to reduce the closed area because data doesn't show oil in some of those spots, a DEP spokeswoman said. To download the latest closed area map, click here.

While the closed area extends along about 100 miles of the Florida Panhandle beyond 10 miles from the coast, the state has closed only a 25-mile stretch in Escambia County to fishing. A portion of the federal closed area extends as far south as the Keys though well to the west of the islands, even though state officials say oil has not entered the "loop current" that would carry it that far south.

But the federal closed area is smaller than just a week ago, when it covered 80,806 square miles. It appears NOAA lifted the closure in a slice of area more than 50 miles southeast of Panama City Beach.

Charter boat Capt. Bob Zales of Panama City said Wednesday that the closure affects all fishermen while the state is spending money on TV commercials to encourage people to go fishing. "We don't know that the oil impacts the fish, No. 1. We don't know that the oil is there, No. 2," Zales said. "If the oil is not there, the area needs to be opened up to fishing. There are still guys out there trying to fish and there are still guys trying to come down." He is president of Panama City Boatman Association and the National Association of Charter Boat Operators.

A NOAA spokeswoman said the agency is working with states to ensure seafood safety and will re-evaluate closed areas as new information becomes available.