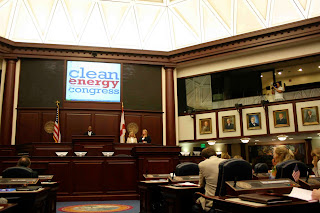 Speakers at the Clean Energy Congress called for requiring more renewable energy and a special legislative session to deal with energy issues.

Against the backdrop of the ongoing Gulf oil spill, more than 120 business owners, environmental activists and government officials participated in the gathering in the Florida House chambers.

"We have not done very much for renewable energy," Rehwinkel Vasilinda told the gathering. "In 2009, we did nothing. In 2010, we did precious little."

Rep. Adam Hasner, R-Delray Beach and House majority leader, submitted written proposals to the Congress that he said are designed to encourage the use of electric cars.

Stephen Smith of the Southern Alliance for Clean Energy and Preston Robertson of the Florida Wildlife Federation said a special session is needed to allow voters to decide whether to establish a renewable energy requirement.

Gov. Charlie Crist in 2007 directed the state to require utilities to get 20 percent of their energy from renewable sources by 2020. But legislation required to do that passed the Senate in 2009 but not the House.

This year, a House energy bill, HB 7229, would have allowed utilities to charge customers for the cost of renewable energy but it failed to win Senate approval. The Legislature approved HB 7179, which allows local governments to finance renewable energy, conservation and storm-hardening improvements for homes.

Smith said a special session is needed to allow voters to approve a state Constitution ban on drilling in Florida waters and to establish a renewable energy requirement for the state. "If the legislature is not going to give us an RPS (renewable energy portfolio), then get out of the way and let us take it to voters in November," he said.

The Clean Energy Congress concludes Tuesday with a noon news conference and signing of a "declaration of energy independence." Chief Financial Officer Alex Sink is scheduled to speak at 9:30 a.m.

Sen. Mike Haridopolos, R-Merritt Island and the incoming Senate president, will moderate the Florida Energy Summit on July 8 in Orlando. That event is sponsored by the new Citizens for Clean Energy.

(Story provided by The Florida Tribune. Story and photo copyrighted by Bruce Ritchie and FloridaEnvironments.com. Do not copy or redistribute without permission, which can be obtained by contacting brucebritchie@gmail.com.)
Posted by Bruce Ritchie at 6/28/2010 11:16:00 PM