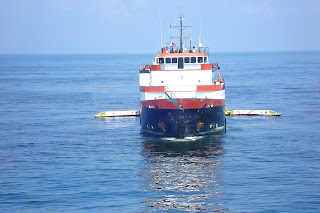 A sweeping arm skimmer vessel collects oil in the Gulf of Mexico on June 10.

Florida is asking federal officials and BP for more vessels to skim oil from the Gulf and has hired five of their own to operate in bays, state officials said.

Tar balls washed ashore in Walton and Bay counties and an oil slick is nearing the inlet to St. Andrews Bay at Panama City Beach. Currents and winds should begin to move the oil towards the west, Florida Department of Environmental Protection Secretary Michael Sole said Monday during a news conference with Gov. Charlie Crist.

There were 20 skimmers in Florida waters to operate in five bays but Florida has asked for more, Sole said. "Candidly I think 100 skimmers in Florida is what we need to have to help try to keep this offshore," Sole said. "As of right now we only have 20 in the near shore battle. But more skimmers clearly can be used to keep this off the coast. I'd love to see 100 more come into Florida."

Crist followed by saying that Sole would be requesting 80 more skimmers Monday, though he also said there are limited assets in the Gulf region to respond to the spill. And Crist said he would follow up on the request later this week when he meets with Kenneth Feinberg, the federal administrator for the new $20-billion BP escrow fund.

"This is not rocket science," Crist said. "We want to protect our state. We want to do everything we can."