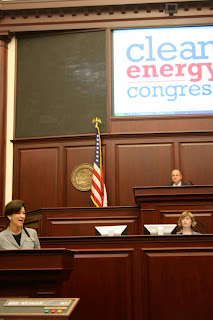 The "Clean Energy Congress" concluded Tuesday in Tallahassee with a series of policy recommendations for reducing energy use and boosting renewable energy. With the massive oil spill in the Gulf of Mexico as a backdrop, representatives from a variety of environmental and industry groups and agencies met in the Florida House chambers to develop energy proposals.

"The congress was entirely focused on solutions" rather than the oil spill, she said. Crist has said he wants a special session this summer on drilling and renewable energy but he hasn't laid out a proposed energy policy.

The delegates also supported continuing with the state solar energy rebate program, which ends June 30. Other positions included supporting federal carbon cap-and-trade legislation and support for a goal of 2 percent energy from biomass from urban wood waste and logging residuals if it can be harvested sustainably.

Recommendations by Rep. Adam Hasner, R-Delray Beach and House majority leader, for increasing the use of electric cars also were supported.

Glickman said the group may reconvene before the 2011 legislative session as the delegates work to spread the message until then. "This is absolutely just the beginning," she said.

"I hope it (the diverse interests represented) will get the policy-makers to pay attention," Glickman said.

(Story provided by The Florida Tribune. Story and photo copyrighted by Bruce Ritchie and FloridaEnvironments.com. Do not copy or redistribute without permission, which can be obtained by contacting brucebritchie@gmail.com.)
Posted by Bruce Ritchie at 6/30/2010 12:19:00 AM