About 150 protest outside environmental journalism conference 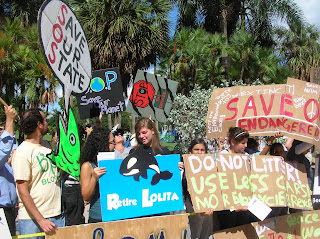 Some said they felt welcomed by the Society of Environmental Journalists, others felt marginalized by the organization.

More than 100 protestors for varying causes held signs, beat drums and chanted Saturday at a "Rally for the Environment" in a park outside the International Hotel in Miami, site of SEJ's national conference.

Ana Campos of Fort Lauderdale described herself as one of the "culprits" who organized the event, involving more than 40 groups in South Florida along with the Miami version of Occupy Wall Street.

She said the groups were welcomed by SEJ and felt they were "preaching to the choir."

"We are celebrating them (SEJ)," Campos said. "We are the ones who couldn't afford it (to participate in the conference) so we infiltrated their conference. And we were greeted with applause and hugs and thumbs up."

Liam Scheff, an independent journalist who has written for independent newspapers in Boston and New York and for Naturalnewsradio.com, said he felt marginalized because so few SEJ members came over to visit the rally.

"They should have walked over across the street -- that's all," Sheff said. While he said only two to four came over, he pointed out "a couple of hundred people got on those (tour) buses."

"I guess I just would have expected more of them to care," Sheff said. "I guess if we had pictures of Paris Hilton or what's her name -- Demi Moore -- and Ashton Kutcher, we would have more (coverage)."

Matthew Schwartz held a sign saying, "No FPL power plant in panther habitat" -- a reference to what he says is a possible Florida Power & Light Co. natural gas power plant in Hendry County.

What was different about Schwartz was that he also was on the SEJ conference agenda. As executive director of the South Florida Wildlands Association, he spoke Friday during the "Florida's Iconic Critters" panel.

He said Saturday that south Florida's landscape, with its biodiversity and threatened species, is a national treasure that deserves the attention of a broader audience.