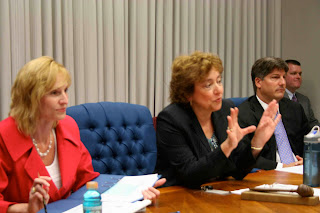 The three remaining members of the Florida Public Service Commission traded accusations of "pettiness" and "silliness" during a tense discussion Tuesday on commission policies and procedures.

The PSC has become a battleground between Gov. Charlie Crist and some legislators who say his appointees have undercut the financial stability of utilities by denying rate hike requests. Crist is considering appointments to replace Ben A. "Steve" Stevens III and David E. Klement, both of whom the Senate refused to confirm in April. Commission Chairwoman Nancy Argenziano and Commissioner Nathan A. Skop also are expected to submit their applications this week for reappointment to the commission, which pays $130,036 a year.

During an internal affairs meeting Tuesday, Argenziano feuded with Commissioner Lisa Edgar over questions Edgar had raised about following commission procedures. After Argenziano repeatedly said that Edgar had lodged a complaint with PSC General Counsel Curt Kiser, Edgar interrupted Argenziano, saying, "Please quit mischaracterizing." Skop, who chaired the meeting during the discussion, banged a gavel and requested order. "I'm not going into the silliness and pettiness I've had to endure here for three years," Argenziano said.

Skop said recent memos by Edgar questioning procedures either amounted to a personal attack on Argenziano or cast aspersions on the commission. "I'm not sure the Legislature or members of the investor-owned utilities would disagree to the extent we have more important issues to deal with like the merits of cases pending before us," Skop said.

Edgar, who had called an earlier motion by Argenziano "silly" and unnecessary, said the PSC policy and procedures document had been ignored or have been followed inconsistently. "What did it mean -- when we start ignoring things that we have as statements or policies on our web site -- I think is a legitimate issue," she said.

Argenziano said she doesn't want accusations against commissioners to come from within the commission. "There is an effort out there, in my opinion, to smear some commissioners -- and I am one of those," she said.

The commission agreed unanimously to ask staff to review its policies and procedures to determine if changes are needed. Argenziano said she was delaying other agency reforms she is considering proposing so that she can conduct more research.

(Story provided by The Florida Tribune. Story and photo copyrighted by Bruce Ritchie and FloridaEnvironments.com. Do not copy or redistribute without permission, which can be obtained by contacting brucebritchie@gmail.com.)
Posted by Bruce Ritchie at 6/15/2010 10:03:00 PM