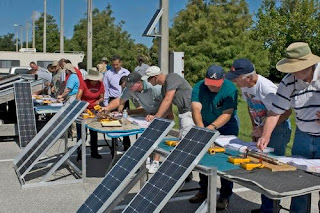 Workers are trained at the Florida Solar Energy Center in Cocoa to install solar panels.

An informal coalition of renewable energy trade groups have developed a policy statement that they hope will push the Florida Legislature to take action on renewable energy.

HB 7229 would have allowed utilities to recover the cost of renewable energy projects from their customers. The bill passed the House despite concerns from some renewable energy groups but died in the Senate as concerns were raised about the cost to consumers. The interest groups involved in the issue included utilities, solar energy providers, biomass energy producers, environmental groups and even pulp and paper mills.

"They all have their own ideas on how we should approach this," Rep. Stephen Precourt, R-Orlando and chairman of the House Energy & Utilities Committee, said after HB 7229 died in the Senate. "It's hard to do that [build consensus] and produce legislation."

Their statement also supports paying down the backlog in the Florida solar rebate program, which ended on Wednesday with more than $41 million in applications. The Legislature has refused to fund the program since 2008.

The groups also want a constitutional amendment that limits increases in the taxable value on commercial property for solar panels or other energy projects similar to the existing limits in place for residential properties.

With the new policy statement, "We can now say we're on the same page in trying to get some kind of policy in place for the small to mid-scale (producers) market in the state," Anthiel said.

(Story provided by The Florida Tribune. Photo courtesy of the National Renewable Energy Laboratory. Story copyrighted by Bruce Ritchie and FloridaEnvironments.com. Do not copy or redistribute without permission, which can be obtained by contacting brucebritchie@gmail.com.)
Posted by Bruce Ritchie at 7/06/2010 08:35:00 AM

The question now is whether or not these trade groups can actually get FPL and their cohorts at AGT and Babcock Ranch to admit that they aren't the only companies in the state who get to build solar projetcs.