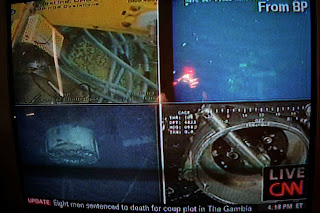 A Florida official welcomed the news Thursday that oil had stopped gushing into the Gulf of Mexico -- for the first time in 87 days. But testing of a new well cap must continue to determine that there are no leaks.

"While it is hard not to have a moment of elation," Department of Environmental Protection Secretary Michael Sole said during a conference call with county emergency officials, "I will tell you there is still quite a bit of work to be done."

BP used robots Thursday just after noon to shut a valve on a new cap and there appeared to be no leaks. But Kent Wells, a BP vice president, said that a full 48 hours would be needed to determine whether the cap will hold or whether leaks elsewhere in the system will create the need to reopen the valve.

"As you can imagine I felt very good not to see any oil going into the Gulf of Mexico," Wells said. "What I'm trying to do is maintain my emotions. Remember this is the start of the test."

"I think it is a positive sign," President Obama told reporters. "It is still in the testing phase. I'll have more to say about it tomorrow."

If the leak resumes, BP would reopen the valves and route the oil to tankers at the water's surface using a new system that could take much of the oil flow, retired U.S. Coast Guard Admiral Thad Allen said. The drilling of a new well that would be used to plug down the leaking well has been halted until the testing is over.

Sole said there still oil in the water off Pensacola Beach and Perdido Key. And he said unfavorable winds in the coming days could send more oil closer the state.

"Just a reminder while we have very good news offshore, we have still quite a bit of battle ahead of us," Sole said.