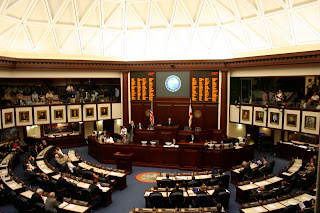 The Florida Legislature on Tuesday adjourned within three hours after opening a special session on oil drilling called by Gov. Charlie Crist.

Crist had called the session to last four days to consider placing a state constitution ban on the ballot in November. But House Speaker Larry Cretul, R-Ocala, told the House shortly after the session began at noon that calling the session "is a terrible way to propose constitutional changes."

Cretul announced the formation of House work groups to study economic and liability issues associated with the BP oil spill. Republicans said the special session did nothing to help affected businesses and workers.

"We're taking this action today in order to return the focus where it needs to be, on creating jobs as well as economic assistance and development for the Panhandle," Cretul said. "We were called here today because of politics. But we are leaving today with a concrete work plan to provide real aid for those who need it the most." 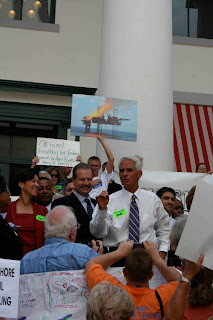 Crist, who earlier had joined protesters in chanting "Let the people vote!" outside of the Capitol before the session began, blasted the Legislature for its inaction.

"How arrogant can a Legislature be?" Crist said. "When President Truman was president, he called the Congress the "do-nothing Congress." Well, today I call this Legislature the do-nothing Legislature, and I'm going to give them hell for it."