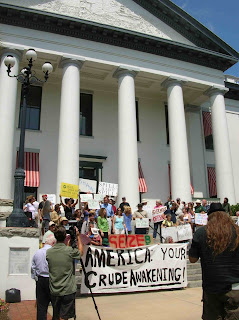 Drilling opponents protested outside of the historic Florida Capitol on May 25. On Tuesday, they will visit the Capitol again during a special session to urge the Legislature to put a drilling ban on the ballot in November.

On the eve of the special legislative session dealing with oil drilling, environmental groups on Monday released a survey showing that 71 percent of Florida voters support placing a drilling ban on the ballot in November.

In response to the BP oil spill, Gov. Charlie Crist called the special session to place a state constitutional amendment on the ballot in November to ban drilling in Florida waters. Those waters extend 10.36 miles into the Gulf of Mexico and 3.45 miles into the Atlantic Ocean.

The BP well that began gushing after an explosion on April 20 was capped on July 15 and was still being monitored on Monday as work continued on a relief well that could permanently close the former gusher.

Six groups supporting the ban on drilling off Florida paid $2,000 for the survey of 1,133 likely voters by ISSI of Washington, D.C.. The survey had a margin of error of 2.8 percent.

Fifty percent of respondents said they do not support drilling; 28 percent said they did; and 21 percent said they don't know. House Speaker Larry Cretul, R-Ocala, says a constitutional amendment isn't necessary because drilling already is banned in state law. He told House members last week to expect a "very short" stay in Tallahassee, indicating there won't be serious consideration given to the ban.

Mark Ferrulo, executive director of Progress Florida, said he hopes that isn't the case. "We hear the gavel-and-go theory -- that is certainly a possibility," Ferrulo said. "Frankly, the Florida House of Representatives is so out of touch with most voters it wouldn't surprise us one bit."

The groups that commissioned the survey were Progress Florida, the Sea Turtle Conservancy, Defenders of Wildlife, the Florida Wildlife Federation, Hands Across the Sand and Audubon of Florida. Drilling opponents plan to gather at the Capitol at 11:30 a.m. on Tuesday to call on legislators to approve placing the amendment on the ballot.

(Story courtesy of the Florida Tribune. Story and photo copyrighted by Bruce Ritchie and FloridaEnvironments.com. Do not copy or redistribute without permission, which can be obtained by contacting brucebritchie@gmail.com.)
Posted by Bruce Ritchie at 7/19/2010 10:05:00 PM