With the BP oil spill again having sounded calls for more attention to energy alternatives, some renewable energy supporters said Tuesday they remain hopeful the Legislature will take up the issue this summer.

"I don't think anybody expected [the House to adjourn in] 53 minutes," said Mike Anthiel, executive director of the Florida Alliance for Renewable Energy. "But I think we knew what was going to happen."

Gov. Charlie Crist, who in May had hinted that he could call a special session that would include renewable energy, instead summoned legislators for what he later described as a "rifle-shot" session dealing only with a proposed constitutional ban on oil drilling. 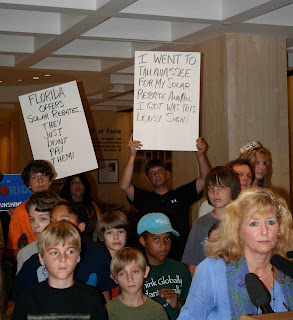 Solar energy advocates, schoolchildren and Rep. Rehwinkel Vasilinda rally at the Capitol on May 11.

Still, at least a half-dozen bills were filed dealing with renewable energy -- either setting requirements for utilities or extending the state solar rebate program that expired on June 30 with more than $41 million in backlogged applications.

But the House and Senate adjourned without considering any bills -- or voting on the drilling ban. House Speaker Larry Cretul, R-Ocala, said he was creating a half-dozen work groups dealing with the BP oil spill but none appeared to cover renewable energy.

The BP oil spill in the Gulf has shifted attention once again to renewable energy, just as high gas prices two years ago shifted some political attention in favor of increased oil drilling.

The Clean Energy Congress, a gathering of more than 120 renewable energy supporters in the House chambers last month, had urged the Legislature to take up renewable energy if a special session were called.

Senate President Jeff Atwater said Tuesday renewable energy could be one of several issues he would like to be addressed in a special session later this summer. Atwater, R-North Palm Beach, said he had asked the governor in May to be specific about what he would propose because of concerns about the cost of renewable energy.

"There could be cost-drivers embedded in there," Atwater said. "I think some of the senators are a little sensitive as to what cost-drivers the governor would be willing to accept."

"I don't think it's a death knell," said Rehwinkel Vasilinda. "Because I think people will see the light as we go forward."

(Story courtesy of the Florida Tribune. Story and photo copyrighted by Bruce Ritchie and FloridaEnvironments.com. Do not copy or redistribute without permission, which can be obtained by contacting brucebritchie@gmail.com.)
Posted by Bruce Ritchie at 7/21/2010 07:35:00 AM