State officials on Friday warned emergency workers against getting "happy feet" in response to the capping of the gushing oil well in the Gulf.

The leaking BP oil well since April 20 has caused oil to wash ashore in the western Florida Panhandle and closed beaches and coastal fishing areas. BP and federal officials continue monitoring pressure in the well on Friday after capping it Thursday, ending the leak for the first time in 87 days. 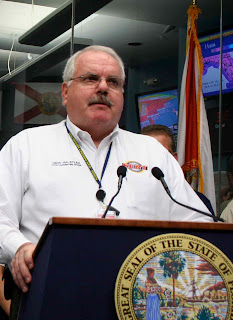 "What I'm worried about is don't get happy feet," said David Halstead, director of the state Division of Emergency Management. "We can have some joy over what occurred yesterday but we're not going anywhere."

He indicated that the state Emergency Operations Center could remain active another four to six weeks even if the oil well is permanently capped. A special legislative session begins Tuesday to consider a constitutional ban on drilling in Florida waters, though Republican House and Senate leaders have indicated they're unlikely to follow Gov. Charlie Crist's call for the ban.

Retired Coast Guard Admiral Thad Allen, the oil spill incident commander, said Friday that pressure within the well had been maintained but not at levels high enough to prove that there are no leaks. The well had been holding steady just above 6,700 pounds per square inch.

Some in the oil industry argue that so much oil has leaked that the oil reserve may be depleted, causing pressures to remain steady but low, Allen said. There will be seismic tests and enhanced monitoring to look for possible leaks, Allen said. That suggests that the 48-hour window for testing could be extended beyond Saturday afternoon.

If leaks are detected, oil will be released again into the environment while a collection system to capture some of the oil is moved into place later next week, he said. A system to capture all of the oil, he said, won't be in place until the end of July.

"We need to have due diligence moving forward," Allen said. "We want to be careful not to create any harm or create a situation that cannot be reversed."

Meanwhile, work on an intercepting well is continuing today with measurements to ensure they are on course, BP senior vice president Kent Wells said. Work on the relief well, which is only 30 feet away now from the main well, had stopped during the testing of the capping system.

(Story courtesy of the Florida Tribune. Story and photo copyrighted by Bruce Ritchie and FloridaEnvironments.com. Do not copy or redistribute without permission, which can be obtained by contacting brucebritchie@gmail.com.)
Posted by Bruce Ritchie at 7/16/2010 08:10:00 PM