Spill may be headed toward Florida as officials monitor 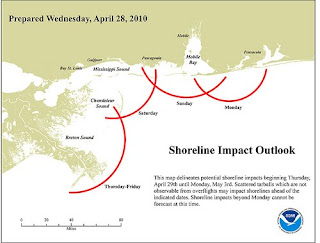 Oil could begin washing ashore on Florida Panhandle beaches as early as Monday, a federal forecast suggested Thursday. About 200,000 gallons of oil per day is leaking from an oil well under 5,000 feet of water off the Louisiana coast after an oil drilling rig exploded and sank last week.

The slick appeared to be more than 80 miles south of Pensacola on Wednesday, according to a National Oceanic and Atmospheric Administration (NOAA) map. Another agency map released Thursday suggested that barrier islands south of Pensacola could be affected Monday and that scattered tar balls could reach the area sooner.

Forecasts beyond Monday lack confidence, a NOAA official said. "The longer we look down the road the greater the uncertainty is with that information," said Charlie Henry, an environmental scientist and scientific coordinator with NOAA. Coast Guard Rear Admiral Mary Landry said the agency had established an incident command center in Mobile, Ala. to coordinate the oil spill response in Mississippi, Alabama and Florida.

Florida Fish and Wildlife Conservation Commission workers were responding to the area and DEP had representatives in the Mobile command center. FWC staff told the commission that the movement of the oil slick depends on currents and weather conditions.

"We're preparing for the worst and hoping it won't get to that point," Gil Nelson, director of FWC's Fish and Wildlife Research Institute, said according to an agency statement. Off Orange Beach, Ala., and Perdido, crews were deploying booms, a tubular material, to trap oil, according to the Pensacola News-Journal.