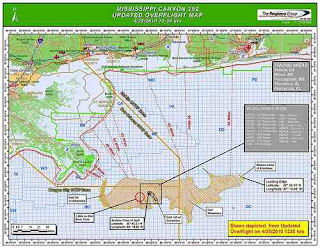 Gov. Charlie Crist on Wednesday described as "very disturbing" an oil slick he viewed Tuesday on an aerial tour leaving from Alabama.

The Deepwater Horizon drilling rig exploded and sank on April 22, causing a continuing leak of up to 200,000 gallons per day from an oil well in 5,000 feet of water, according to Associated Press. The Coast Guard is coordinating efforts to stop the leak and clean up a slick that was 23 miles from Louisiana and 94 miles from Florida. Crist toured the slick yesterday from Mobile, Ala.

The Florida Department of Environmental Protection was monitoring the situation and coordinating with federal partners, a DEP spokeswoman said. The Coast Guard was considering burning the oil on the water's surface to prevent it from washing ashore.

Asked about what he saw on his tour, Crist told reporters Wednesday, "Oh, it's very disturbing. I mean it was horrific, enormous, remarkable with its size."

On Tuesday, the governor indicated that the spill should make anyone rethink their support for oil drilling. On Wednesday he made a similar suggestion. "I think the impact that it could potentially have on Florida has to give us all a pause," he said. "I think only being prudent, wanting to protect our people in this state is appropriate."