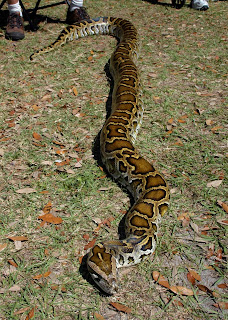 A bill that would ban Burmese pythons and five other snake species along with Nile monitor lizards was approved Wednesday by the House.

SB 318 by Sen. Eleanor Sobel, D-Hollywood, now goes to the governor. The bill was introduced in response to media firestorm created last summer after a pet python strangled a 2-year-old girl in her Sumter County home.Thousands of the snakes are believed to have been released and are breeding in South Florida and the Everglades, according to scientists.

The U. S. Department of Interior announced in January it was considering banning nine snake species, including the six that would be banned in SB 318. People would be allowed to keep the snakes they already have a $100 license from the Florida Fish and Wildlife Conservation Commission. There was no opposition to the Senate bill or HB 709 as they sailed through committees. The House approved by the bill 16-0.

The bill was amended by the Senate General Government Appropriations Committee so that the ban would not apply to zoos or registered traveling exhibits.

The bill also requires the Fish and Wildlife Conservation Commission to report by Dec. 31 whether iguanas should be placed on the commission's "reptiles of concern" list. The commission, meeting Wednesday in Havana, approved moving forward with an agency rule that would ban the six snakes and the Nile monitor as new pets but owners could keep those already licensed.