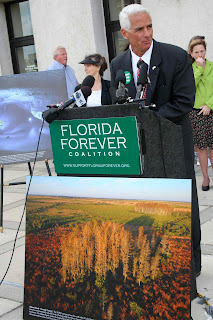 Gov. Charlie Crist on Wednesday told a rally at the Capitol that the state's land-buying program is critical to the Florida's tourism economy.

Florida Forever is the largest land-buying program in the nation with more than 2 million acres having been purchased since 1990. But the program is expected to run out of money by the end of the year if it doesn't receive cash or bonding authority from the Legislature. Florida Forever had received $300 million in bonding authority each year since 1990 but the Legislature provided no new money last year.

Crist reminded a Florida Forever rally today at the Capitol that he requested $50 million in bonding authority in his 2010-11 budget request. He also said that as governor, he understands the importance of protecting Florida.

The Senate's adopted budget for 2010-11 includes $15 million in cash for Florida Forever while the House provides nothing for the program.

"We are here today to implore the Legislature to continue the Florida Forever program, to save Florida Forever," said Andrew McLeod, director of government affairs for The Nature Conservancy.