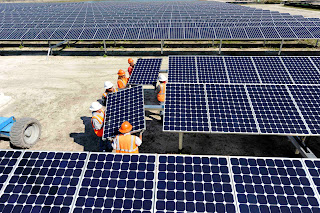 Officials from NASA and Florida Power & Light Company Thursday commissioned FPL’s Space Coast Next Generation Solar Energy Center. The solar power facility is located at Kennedy Space Center and is producing an estimated 10 megawatts of power, which is enough energy to serve 1,100 homes.

PCB EUP 10-06 is scheduled today to be heard by the House Energy & Utilities Committee.  The bill removes a legislative finding in 2008 that climate change can be addressed by reducing greenhouse gas emissions. The proposed committee bill also removes a requirement from the 2008 energy bill that directed the Public Service Commission to recommend requirements for utilities to increase their use of renewable energy.

Audubon of Florida Executive Director Eric Draper said the measures in the bill would represent a step backwards. "I think it unfortunately reflects a kind of a head-in-the-sand view of reality," he said. Audubon, he said, likes the bill because he said it provide incentives for renewable energy. The bill allows utilities to petition the Public Service Commission for the recovery of costs for up to 735 megawatts of renewable energy through 2013.

The Southern Alliance for Clean Energy also is troubled by how the bill removes the climate change language. SACE also would prefer a required goal for renewable energy to create certainty for the market, said George Cavros, an attorney who also is a consultant to the group.

A spokeswoman for the Babcock Ranch development in southwest Florida said the bill language would remove a barrier to development becoming the first solar city in the United States.

The Babcock Ranch solar project, with an initial 75-megawatts of power generation, has been stalled because state law now requires utilities to pursue the cheapest power alternative, spokeswoman Lisa Hall said. The proposed committee bill, she said, would change that by allowing utilities to recover from ratepayers the cost of solar or other renewable energy.

"What we are looking for is policy that will enable people who are poised to make this investment move forward," Hall said.

Rep. Stephen Precourt, R-Orlando and committee chairman, on Thursday described the bill as a "work in progress." Representatives of utilities said they could not comment because they had not had time to review the bill.

(Photo courtesy of Florida Power & Light Co. Story provided by the Current, produced by The Florida Tribune. Story copyrighted by Bruce Ritchie and FloridaEnvironments.com. Do not copy or redistribute without permission.)
Posted by Bruce Ritchie at 4/09/2010 07:52:00 AM