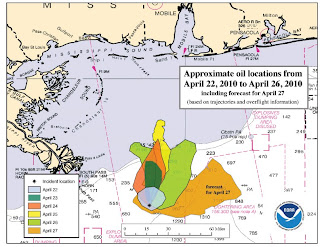 An oil spill off the Louisiana coast drew the scrutiny from Florida officials Tuesday as it appeared the slick was moving closer to Florida. The Deepwater Horizon oil rig blew up and sank last week, causing 1,000 barrels (about 42,000 gallons) of oil per day to leak from the ocean floor.

The Coast Guard said Tuesday morning that a 600-mile circumference rainbow sheen of emulsified crude was approximately 21 miles from the Louisiana coast. A National Oceanic and Atmospheric Administration forecast showed the oil moving west, within about 80 miles of Pensacola. Gov. Charlie Crist Crist viewed the spill on Tuesday. A BP representative said four rebotic vehicles were working to seal off the oil well leak in water nearly a mile deep. 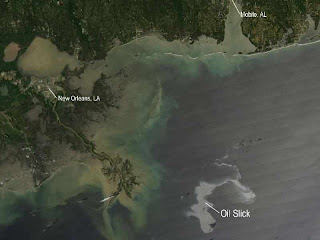 Officials said the oil is not expected to reach any shoreline in the next three days and it is unclear where that could occur.

Coast Guard Rear Admiral Mary Landry said she is considering burning the oil on surface of the Gulf of Mexico to prevent the slick from washing ashore. "This is something we are considering using in this constantly changing and dynamic environment," she told reporters on a telephone conference call.

Oil drilling opponents in Florida say the accident shows that drilling is inherently unsafe. Asked whether the incident is making him rethink his support for drilling, Crist said, "If this doesn't give somebody pause, there is something wrong I think."

U. S. Sen. George LeMieux, R-Fla., said the federal government needs to make the accident its no. 1 priority. "We need to move heaven and earth to stop this from becoming an environmental disaster," he said in a statement. Homeland Secretary Janet Napolitano and Interior Secretary Ken Salazar announced Tuesday a joint investigation into the incident, Landry said.