Tar balls could be on beaches for months 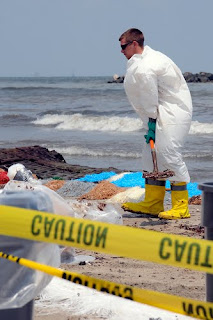 A worker removes oil from a beach in Louisiana on May 23. No oil connected with the Deepwater Horizon spill has been confirmed on Florida beaches.

Researchers are concerned that a sub-surface plume of oil could threaten Florida's coast for months even if BP is successful in capping a gushing oil well. The Deepwater Horizon oil spill off the Louisiana Coast already has dumped an estimated 18 million gallons of oil in the Gulf of Mexico, making it the largest spill in U. S. history.

On Friday, BP continued its "Top Kill" procedure that was intended to stop the leak by choking off the flow of oil by pumping heavy rilling "muds" into the well.

Scientists with the Oil Spill Academic Task have advised the Florida Department of Environmental Protection on possible worst-case scenarios -- all fraught with uncertainty -- if the spill continues, said Robert K. Cowen, associate dean for research as the Rosentiel School of Marine and Atmospheric Sciences at the University of Miami.

Those worst-case scenarios include a plume of dispersed oil beneath the surface -- in addition to an oil slick -- moving into the Straits of Florida where it could harm coral reefs in the Florida Keys and eventually threaten the east coast. Some oil was trapped this week within a circulating eddy in the Gulf loop current and was moving away from Florida and the straits, DEP Secretary Mike Sole told the Cabinet this week.

Another worst-case scenario, Cowen said, would involve oil being churned up from the ocean's depths by storms and coming ashore for weeks or even months after the spill is capped. "There are a lot of unknowns," he said. "Even if they stop the oil (leak) and the (loop current) eddy is pinched off, we are not necessarily out of the woods." He said data on the location and movement of oil is needed but is challenging because of its size and complexity of the spill and currents.

Sole told reporters on Tuesday that the spill could pose a threat for months even as he was sharing the good news that none had hit Florida beaches and that the currents were working in the state's favor. "I do expect as you look at the long-term fate and transport of an oil spill of this magnitude you will see tar balls and tar patties for a long time," Sole said. "When a storm comes, you suddenly have a few more tar balls on the beach than normal."

(U.S. Coast Guard photo by Petty Officer 3rd Class Patrick Kelley. Story provided by The Florida Tribune. Story copyrighted by Bruce Ritchie and FloridaEnvironments.com. Do not copy or redistribute without permission, which can be obtained by contacting brucebritchie@gmail.com.)
Posted by Bruce Ritchie at 5/28/2010 06:25:00 PM