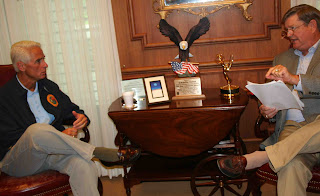 Bronson said the bills are needed to support agriculture and he'd heard rumors that Crist may veto them but wasn't sure if the rumors were true. "I'm not sure yet either," Crist said. "Some of that bubbles up before I get to weigh in."

HB 981 is intended to reverse a circuit court judge's ruling in Bradford County that Rayonier property that was divided and sold no longer qualified for agricultural tax exemptions. The Property Appraisers Association of Florida says the bill would allow tax breaks for "sham" agricultural operations and has asked Crist to veto it. Bronson said the bill also allows the state to issue federal permits for spraying against mosquitos and non-native aquatic plants. And he said it allows a tax collected on citrus products to be used to fight the "black spot" citrus disease.

HB 7103 would prevent counties from regulating agriculture if the agricultural activity already is regulated by the state, Bronson said. And it requires developers to acknowledge they are building next to agricultural lands in an attempt to keep new homeowners from trying to shut it down. The Florida Association of Counties is opposed to the bill but has not requested a veto.

"Those are some very important issues that are going to affect tens of thousands of jobs in agricultural production in this state," Bronson said.