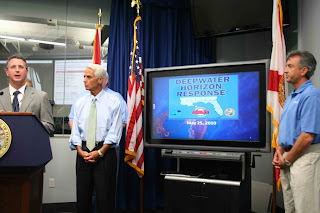 Gov. Charlie Crist announced Tuesday afternoon that Florida received $25 million from BP for advertising, offsetting criticism earlier in the day from a state senator that the governor wasn't doing enough in response to the spill.

At the state Emergency Operations Center, Crist announced shortly after 4 p.m. the receipt of the $25-million wire transfer from BP. VisitFlorida CEO and President Chris Thompson said the ads would begin airing within 24 to 48 hours in cities outside Florida from which people often drive to Florida.

New television commercials were being developed, Thompson said, after a morning meeting in which Cabinet members and Sen. Don Gaetz, R-Niceville, criticized other VisitFlorida commercials. Cabinet members said the commercials did little to emphasize that Northwest Florida beaches had not received oil from the spill.

Gaetz also complained that the money pledged by BP to promote Florida beaches had yet to be spent. "It doesn't do any good for it to be in a pipeline somewhere," Gaetz said. Crist responded by saying, "Let me assure you we are doing everything humanly possible." Outside the meeting, the senator told reporters, "It's Day 35 and we haven't seen effective, timely action. It's in days like this that I miss Jeb Bush."

CFO Alex Sink and Agriculture Commissioner Charles Bronson complained that the ads don't convey that Northwest Florida beaches are unaffected by the spill. "This does nothing to help Northwest Florida," Sink said. Bronson said the ads seemed as though they could have been filmed a year or two earlier. Thompson said he understood the sense of urgency for Northwest Florida, where beach season is kicking off this Memorial Day weekend.

And Crist responded that the state couldn't spend money it didn't have yet. "It's easy to try to point fingers and cast blame," he said. "What's important is to work as a team and for us to be focused on doing everything we can do possible to protect our beautiful state and tell friends in our neighboring states to come to the Panhandle."

Sen. Charlie Justice, D-St. Petersburg, responded to Gaetz later by issuing a statement saying that hotel cancellations were not occurring only in the Panhandle and that "we are in this together as a state. " He also called on the Legislature and governor to support a constitutional ban on offshore oil drilling.

Later during the announcement at the EOC, Crist said he'd already called seven tourist development councils to tell them the money had been received. "They have ads in the can that are ready to go to tell travelers that the Florida beaches are clean and clear, the fish are biting and the Sunshine State, including Northwest Florida, is open for business," he said.

(Story provided by The Florida Tribune. Story and photo copyrighted by Bruce Ritchie and FloridaEnvironments.com. Do not copy or redistribute without permission, which can be obtained by contacting brucebritchie@gmail.com.)
Posted by Bruce Ritchie at 5/25/2010 06:27:00 PM

I heard a new ad from BP with laims of what's being done. I am moved to tears grieving for our beloved Gulf of Mexico. I am angry. Folks have no connection with Mother Earth and don't realize how important the gulf is. It is so sad. The fault lies with many, not just BP, but gov't agencies as well... and the dispersant issue. Is the EPA kidding me? Scale back? There are much less toxic dispersants. The chemical they used was studied up in Alaska and Aleyska was probably eager to get rid of their stockpiles there. The studies have already been done and I have a friend who worked on them. Those making the big $$ definately don't care and the "change" i had hoped for has backfired. I don't know what to do...