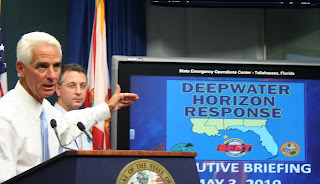 Gov. Charlie Crist said the Gulf oil spill provides a clear message about the need for renewable energy and he hinted that the topic could be included in a special session of the Legislature.

The governor said the timing of the spill was "pretty extraordinary" considering that the Legislative session last week had bills dealing that with drilling. Actually, there was little movement on the bills because Senate President Jeff Atwater said he preferred to study the issue.

Crist two years ago reopened the debate about drilling by saying he was willing to consider it for Florida if was clean, safe and far enough from the coast. But Monday he said state leaders must "cease and desist" from such drilling talk. He said Florida now may suffer from oil drilling off Louisiana's coast.

"We have go to further to renew our commitment to solar and wind and nuclear and natural gas, too. We have lot of that and it's cleaner than this stuff," he said.

Asked whether he would consider calling back legislators to deal with energy, he said, "absolutely."

Crist is already mulling over the idea of calling lawmakers back to Tallahassee this summer in order to get them to adopt ethics and anti-corruption measures. Atwater has already said he is open to the idea of returning to take care of "undone" business.

CFO Alex Sink balked at the idea of the governor holding a special session on the topic.