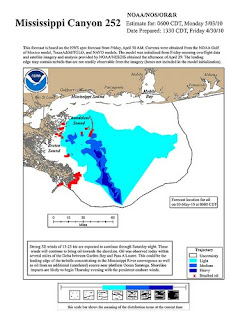 The Deepwater Horizon drilling rig exploded on April 21 and sank the following day, causing about 200,000 gallons of oil a day to gush from a well under 5,000 feet of water. Gov. Charlie Crist has declared a state of emergency for 18 coastal counties from Pensacola to Sarasota.

The spill was not expected to reach shore in Florida within 72 hours, according to the Florida Department of Environmental Protection. A NOAA map showed a portion of the spill extending about as far east as the Santa Rosa and Okaloosa counties line about 30 miles from the coast.

BP on Thursday was lowering a containment chamber over the well to perhaps stop the leak as early as Monday. But BP officials and the Coast Guard have cautioned against raised hopes because of the complexity of the work in water nearly a mile deep.

Patches of greasy emulsified oil began washing ashore in the Chandeleur Islands of the Breton National Wildlife Refuge near the mouth of the Mississippi River. More oil is expected to wash ashore there in the coming days, U. S. Fish and Wildlife Service representatives said.

About 24 miles of oil containment boom have been placed along the coast near Pensacola and another eight miles has been deployed near Panama City, according to DEP.

Staff from the Florida Wildlife Conservation Commission and University of South Florida faculty are aboard a research vessel that left Wednesday from St. Petersburg to monitor microscopic plankton and fish larvae to measure later the harm that may be caused by the oil spill.

About 70 FWC staff are involved in preparations for the spill but no affected wildlife have been found off Florida's coast, the agency said in a statement issued Thursday.

"We want to assure the public that good plans are in place for the recovery and rehabilitation of all wildlife," FWC Chairman Rodney Barreto said.