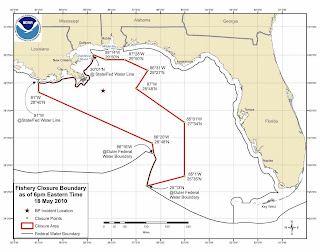 A federal closed area to fishing was nearly doubled in size Tuesday to extend far to the east towards Florida. But the area remained about 50 miles from its closest point on the Florida Panhandle near the Alabama state line.

The movement of some oil towards the Gulf loop current led National Oceanic and Atmospheric Administration officials to extend the closed area east about 120 miles to a line extending about 175 miles south of Apalachicola and 140 miles west of St. Petersburg.

The closed area increased from 24,241 square miles to 45,728 square miles, which is about the size of Pennsylvania. That closed area represents about 19 percent of the federal waters in the Gulf of Mexico.

Charter boat captain Bob Zales of Panama City said the closure should have little effect on most recreational anglers, though he said commercial fishermen who fish for tuna and billfish will be affected. "Very few recreational fishermen get out that far to fish," he said.
Posted by Bruce Ritchie at 5/19/2010 08:16:00 AM