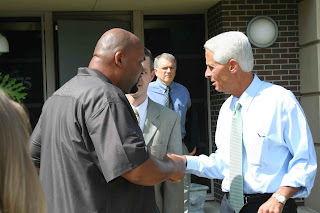 Gov. Charlie Crist says he is giving HB 1565 regarding agency rule-making "a close look" as he considers whether to sign the bill or veto it in response to opposition.

Florida Department of Community Affairs Secretary Tom Pelham has said the bill would "greatly complicate" the agency approval of rules that are needed to implement laws that the Legislature approved. The Florida Department of Environmental Protection also has concerns about the bill but neither department has asked the governor to veto it. Audubon of Florida, 1000 Friends of Florida and St. Johns River Water Management District staff have called on the governor to veto the bill. And Sierra Club Florida this week urged its supporters to call the governor requesting a veto.

Asked Tuesday by the Florida Tribune whether he will veto the bill in response to concerns from Pelham and others, Crist responded, "I'm giving it a close look, yeah. There is a lot of that going on." And regarding his veto pen, Crist quipped, "People are telling me I need to get more ink for that thing."