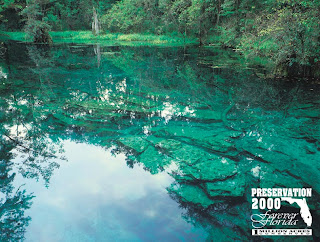 State officials for the first time are saying they know at what level of nitrate in groundwater that springs lose their ecological balance.

Florida has more than 700 named springs, several of which are the central attraction at state and local parks across the state. But many of those springs have become choked with weeds and algae as nitrate levels in groundwater have increased.

Busloads of springs supporters are traveling to Tallahassee on Tuesday for a noon rally at the Capitol to show support for expected legislation that would regulate the discharge of nitrogen into groundwater. Also Tuesday, the U.S. Environmental Protection Agency holds hearings in Tallahassee on proposed nitrogen and phosphorus limits for springs and other waterways.

A state rule says that pollution discharges are not allowed if they create an "imbalance" of plants, fish and wildlife. But some environmentalists and scientists said that narrative standard has hamstrung springs protection because the standard was difficult to define, forcing officials to wait until the damage was done.

But the Florida Department of Environmental Protection now is saying that the imbalance occurs when nitrate-nitrogen in springs reaches .35 milligrams per liter of water. That's about seven times the amount of nitrate that occurred naturally in springs, said Jerry Brooks, director of DEP's Division of Environmental Assessment and Restoration.

"That is a number we think is well-supported in science," Brooks said.

One environmental activist said having a number will help the state protect springs. But one water quality scientist who specializes in springs ecology said the state's number may be too high.

Until recently, the only numeric limit for nitrate in springs was the safe drinking water standard of 10 milligrams per liter. But the usually clear, blue springs have turned green at much lower nitrate levels.

Wakulla Springs had just over 1 milligram per liter of nitrate in it when it started becoming choked with weeds and algae after 2000. Sources of nitrogen include wastewater plant discharges, septic tanks, fertilizer and dirty stormwater runoff.

Brooks said the new nitrate limit will be used in deciding whether to approve pollution permits. For springs where the nitrate level already is too high, DEP will work with landowners and utilities and other stakeholders to reduce nitrogen discharges.

The .35 springs nitrate limit also is being proposed by the U.S. EPA . But the proposed federal rule faces opposition from agriculture, industry and utilities and has been questioned by DEP officials.

Brooks said EPA is proposing the same limit that DEP now is using. Whatever happens to the proposed EPA rule, Brooks said, DEP can continue using the limit in determining the health of springs under the state's narrative rule that prohibits the "imbalance" of fish and wildlife.

Jim Stevenson, a former DEP biologist who is coordinator of the state working groups for Ichetucknee and Wakulla springs, said having the numeric limit is important.

"I was pleased to hear it would be that low considering the opposition there is going to be," Stevenson said. "I think that is a really good level."

Robert Knight, president and founder of Wetlands Solutions Inc. in Gainesville, pointed out that the nitrate limit in springs 100 years ago was .05 milligrams per liter. The St. Johns River Water Management District last year set a limit of .21 milligrams of nitrate per liter for Wekiva Springs.

"I just want them (state and federal officials) to acknowledge that .35 is a target for protection," he said. "But the actual historic level is much lower than that. And it may need to be lower than that to have full recovery (of springs)."

The EPA will hold hearings Wednesday in Orlando and Thursday in West Palm Beach. To register, go on the web to http://www.epa.gov/waterscience/standards/rules/florida/

To learn more about the springs rally, go to http://www.1000friendsofflorida.org/water/FloridaSpringsRally.asp