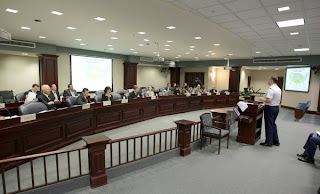 Members of a House panel Wednesday were provided with oil spill figures and they were told that seismic research is needed to find offshore deposits of beach sand before oil drilling is allowed.

The House Select Policy Council on Strategic & Economic Planning is holding hearings towards developing legislation to allow oil drilling in Florida waters, which extend 10.3 miles from the Gulf coast.

Coast Guard Capt. James Hanzalik said that about 230,000 gallons had been released since 1998 during about 5,000 spills from oil and gas platforms.

A spill must be reported for amounts as little as a teaspoon if it creates an oil sheen on the water's surface, Hanzalik said.

"I have to confess I've done that with suntan oil," replied Rep. Paige Kreegel, R-Punta Gorda.

Thomas Campbell, president of Coastal Planning & Engineering, told the council that seismic research is needed to identify high-quality sand deposits before oil and gas rigs and pipelines are placed on the sea bottom.

He said developing data for 10 million acres of potential quality sand would cost about $20 million and could be completed in a year.

Rep. Dean Cannon, R-Winter Park and council chairman, said the testimony suggested that there are plans or measures in place to help drilling co-exist with other coastal uses.

"I'm hopeful the information we are hearing from folks today may be reassuring," he said.

But after the meeting Rep. Keith Fitzgerald, D-Sarasota, disputed the spill statistics by pointing out that one spill could involve thousands of gallons -- not just a teaspoonful.

"I think it actually shows how complex the issues are," Fitzgerald said. His district was the focus of Campbell's presentation on the search for quality beach sand for a restoration project on Anna Maria Island.

Gary Appelson, policy coordinator with the Caribbean Conservation Corp. in Gainesville, said spills will continue to happen and Florida is unique in having vast seagrass meadows, reef wrecks and mangrove trees along its coast.

"We have yet to hear anyone talk about how to mitigate for those unique Florida habitats," he said.

The Council is scheduled to hold another hearing Feb. 18 on drilling issues.

You need to help find a way the citizens who are going to participate in hands across the sands this weekend to organize into a nucleus group to fight this legislative boondogle. I will get the emails of the people who may (or may not) come to our beach.

Having lived in Seattle when the Exxon Valdez ran aground and having friends whose livelihoods were destroyed with no accountability or reparations we cannot let these fraudsters shilling for the oil industry continue their unabated march of destruction.

Maybe you can help find a way with your journalistic reach to galvanize those who can give support to a just cause.

I can be reached at civilsociety@bellsouth.net

I appreciate your suggestion and your energy. But I feel the best contribution that I can make to my readers is to cover these issues fairly and accurately.

Therefore it would not be my place to participate in organizing on behalf of any side in this issue or other issues.

I hope that you and other readers will find my reporting to be informative and that it serves whatever purpose you would like it to.

I certainly hope that people will use the comments section to provide useful and informative information or insights.

In today's unfair and inaccurate world of spin it is only through advocacy of a just cause that we will be able to regain a sense of equity. People like yourself have that venue which could be used to advance progress on issues that need a larger forum.

The biggest casualty of today's journalism is the perception that it is necessary to create a firewall when times are as desperate as they are. Yet sensational journalism seems to have usurped the need to inform which now seems to be interpreted as taking a "side".

You'll have to excuse my criticism but I've been looking for years to find someone with a job that has a megaphone and allows them to take a stand. I guess I overshot once again.