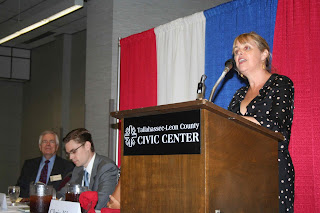 A founder of a proposed state constitutional amendment on growth said during a debate today that supporters face "greedy" opponents, while a spokesman for an opposition group said the founder has shown people they can have any opinion "as long as it's her's."

The proposed Amendment 4 would require changes in city and county growth plans, also called comprehensive plans, to be approved by local voters.

The amendment will be on the ballot for voters statewide in 2010. The Division of Elections last month agreed to put the proposal on the ballot after a favorable Florida Supreme Court ruling for amendment supporters.

At the Capital Tiger Bay Club, amendment supporter Lesley Blackner, an attorney from West Palm Beach and founder of Florida Hometown Democracy, said the proposal would transfer important growth decisions from the political elite controlled by developers to affected citizens.

"Why would voters reject good plan changes?" Blackner said. "If the developer can't persuade the voters, he will have to live in accordance to the plans.

"Following growth management is not bad business, and it is not anti-business," she said. "Those who fight us are not worried about the state's future and its economic well being. They are worried about their own personal profits. They are simply greedy."

Houck points to St. Petersburg Beach, which adopted a requirement for voter approval and then saw supporters of the state constitutional amendment challenge the results of an election two years later.

"They lost at the ballot box and within 24 hours, they had filed a lawsuit to overturn the results of a fair and free election," he said. "There have now been more than a dozen lawsuits in St. Pete Beach all aimed at delaying or denying or somehow frustrating the manifest will of the people of St. Pete Beach.

Blackner later responded that the city of St. Petersburg Beach and developers were among those who also filed lawsuits after the election.

She also said that the Legislature showed during the last session this spring that it's in the control of development interests. The Legislature approved SB 360 and SB 2080, both opposed by environmentalists because they relaxed restrictions on growth, and a House committee approved a bill abolishing the state's lead planning agency, Florida Department of Community Affairs.

"So when you look honestly and clearly we see a system that is incapable of reforming itself," she said. "The political elites just don't have it in them to make the changes necessary."

DCA Secretary Tom Pelham sat at the head table but did not speak. He told reporters after the debate that the Legislature has provided an argument for amendment supporters.

He said he was disappointed that none of his proposals for reforming the growth management process -- which he called a "Citizens Bill of Rights" -- were adopted by the Legislature.

"I have a concern that creates a perception among the people that resorting to a referendum might be the only recourse for them," Pelham said.