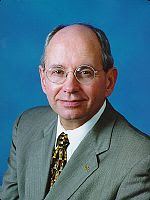 Jim Murley already has received some honors in his life, yet he says being recognized by Gov. Charlie Crist as this week's "Point of Light" is particularly meaningful.

Murley is chairman of the Florida Energy and Climate Commission and he is director of Florida Atlantic University's Cantanese Center for Urban & Environmental Solutions. He was named a point of light in honor of Climate Change and Energy Efficiency Awareness Month.

"It is particulary meaningful to me at this time because it represents recognition of my efforts, in collaboration with many partners, to move forward on a set of very important issues dealing with energy and climate facing Florida," Murley said today in an e-mail to FloridaEnvironments.com. He is travelling out of the country.

Crist said Murley has been a tireless advocate for climate change awareness in Florida. "His breadth of knowledge and dedication to making Florida an example of environmental stewardship has been a great service to the people of this state," the governor said in a news release.

Murley said the commission now is working on preparing legislatively mandated comments on proposed energy efficiency goals for utilities. The commission, which holds a telephone conference call on July 22, also is moving forward with administrative steps on awarding $60 million in federal economic recovery funds awarded to Florida by the U.S. Department of Energy, he said.

With a greenhouse gas cap-and-trade bill having passed the House two weeks ago, Murley said the final outcome could pre-empt a state proposal being prepared by the Florida Department of Environmental Protection for presentation to the 2010 Legislature.

"The bill also contains very detailed direction for the preparation of federal and state climate adaptation plans that if is eventually passed and funded will be very helpful in assisting the (commission) implement the Florida Climate Action plan," Murley said.