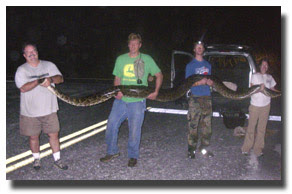 State officials say they're launching an effort Friday to put a dent in the growing population of wild Burmese pythons, estimated perhaps at 100,000 or more in the Everglades.

Thousands of the pythons, which can grow to more than 20 feet in length, are roaming the Everglades National Park and South Florida after having escaped or been released as pets. The snakes could spread throughout much of Florida and the southeast, according to a federal study.

On Friday, the Florida Fish and Wildlife Conservation Commission will launch a program to allow about 20 permit-holders to take the snakes from state lands and sell them for their meat and hides.

"The goal is to curb or reduce the number of pythons in the Everglades and our wildlife management areas," said Gabriella Ferraro, an agency spokeswoman in West Palm Beach. "We are trying to put a dent in it that (population)."

Crist spoke with the state wildlife agency last week about taking action, according to a spokeswoman for the governor.

“It is important that we take action now to ensure a safe and healthy future for Florida’s native wildlife and habitats in the Everglades,” Crist said in a news release.

Permit-holders, who won't be paid by the state, will collect basic data on pythons captured. The program will extend through the remainder of the year and will be evaluated for effectiveness, Ferraro said.

"If we have to open it up to other permit holders we will do that," she said.

"They are threatening endangered wildlife there -- and, Lord forbid, a visitor in the Everglades ever encounters one," Nelson said.

"Secretary Salazar agrees with Senator Nelson that pythons pose a significant threat to the Florida Everglades and must be dealt with immediately," the Department of Interior said in response statement. Salazar has asked federal and state agencies to quickly develop a plan to control the invasive species.

Earlier this month, Nelson proposed a ban on the import of Burmese pythons after a two-year-old girl was killed when a pet python escaped in her home in Sumter County.

Everglades National Park officials could not be reached for comment.