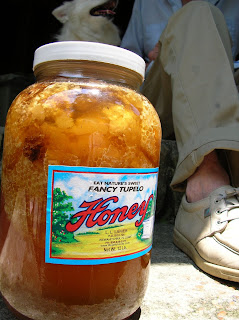 Florida agriculture officials say they want to ensure that the honey placed on store shelves is made by bees and is not diluted with corn syrup or other products unless it's labeled that way.

Agriculture Commission Charles Bronson today announced that Florida had become the first state in the nation with a regulation prohibiting chemicals or additives, including corn syrup sweeteners, in products marked as honey. Florida is the fourth-largest honey producer in the nation.

Increasing amounts of honey with added sweeteners is being imported into Florida from Asian and South American countries, Bronson said. Beekeepers complained they were facing unfair competition from an inferior product.

"For people to pay for honey prices and to buy something less than honey was a little bit on the fraudulent side to consumers of the state of Florida and to businesses," Bronson said.

Under the new regulation, honey containing anything other than "natural food product resulting from the harvest of nectar by honeybees" is considered adulterated or mislabeled. The state could issue a "stop sale" order and repeat offenders could face fines of up to $500 per violation, according to the Florida Department of Agriculture and Consumer Services.

Florida honey producers had $15 million in sales in 2008, creating 500 jobs and having an economic impact of $40 million. Bees play a key role in pollinating agricultural crops.

Honey production is closely tied to the natural environment in North Florida, where tupelo honey producers face an uncertain future. Drought, the draining of wetlands and competition for water with Alabama and Georgia has reduced beneficial flooding required by tupelo trees along the Apalachicola River.

Five major honey processors in 2006 petitioned the Food and Drug Administration to establish a U.S. standard for honey, Bronson said. But Bronson said the FDA two years later responded that due to other pressing matters, it would be unable to review the petition.

"We have now put a rule out (saying) what honey really is in the state of Florida," he said. "Twenty-eight states are looking at the same thing.

"We hope the Food and Drug Administration also will look at that definition and realize that honey is what bees make and not what people blend together," he said.

A non-binding international standard for honey was established in 1981 and revised in 2001. It also states that honey shall not have any food additives or additions other than honey.

Nancy Gentry of Interlachen, owner of the Cross Creek Honey Co. and a member of the state honey technical council, said, "Honey is a magical food from an insect that comes to us pure right from the beginning."

"Unfortunately," she said, "We've had a lot of people decide they want to make more money from the product they got so they cut it (mix it)."

"We have millions of barrels of products coming across the U.S. border that is not honey yet is being sold that way. And it is killing the U.S. honey producers."