More than 50 representatives of environmental groups and state and federal agencies gathered in Leon County Thursday to discuss revising strategies for protecting Florida's wildlife in response to climate change. 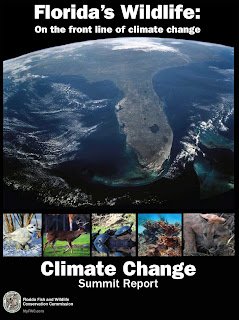 With Florida's climate warming and sea levels rising gradually, scientists and state wildlife officials are concerned about loss of habitat, disruptions in migration patterns and other possible threats to the survival of wildlife and the ecosystems they depend on.

The Florida Wildlife Federation coordinated the Teaming with Wildlife coalition meeting Thursday at Tall Timbers Research Station as a follow-up to a climate change summit held last October in Orlando. The Florida Fish and Wildlife Conservation Commission, which held the summit, is beginning to revises its wildlife action plan with a stronger emphasis on responding to climate change.

"Keeping common species common" is the theme of the Teaming with Wildlife Coalition, said Jay Liles, a consultant to the Florida Wildlife Federation.

"We have hundreds of species that are nearing extinction or are in danger of extinction in this state that we are protecting," Liles said. "We also have a need to keep protecting species we all have seen for generations" to prevent them from becoming endangered.

The Florida Fish and Wildlife Commission in 2007 adopted a resolution noting the state's vulnerability to climate change and directing staff to engage with other experts and agencies on the issue of climate change.

"We are actually leading the nation and leading the world here," Commissioner Brian Yablonski of Tallahassee said. "This group here is the vanguard of this."

The reintroduction program is encouraging prescribed burning every year or two in about 100,000 acres of identified forests to remove woody underbrush and restore native grasses that support quail and other wildlife, said Bill Palmer of Tall Timbers.

Proper management of habitat is needed to create more "resilient" ecosystems that can better withstand climate change or "whatever the next insult is," said Doria Gordon senior ecologist with The Nature Conservancy's Florida chapter.

"We have huge amounts of natural areas in Florida right now that don't have budgets behind them for adequate management," she said. "We don't have good (prescribed) fire programs on the ground that we need to have. We have invasive species. We have hydrologic restoration that we need to do.

"That has to be the pinnacle for managing for wildlife in Florida and keeping common species common. Because at that point if we have well-managed natural systems that have the greatest flexibility and have healthy populations that can disperse naturally or interact however they will under the new climate situation, we will have the best possible outcome in terms of biota."