Group warns it will sue over Panama City airport 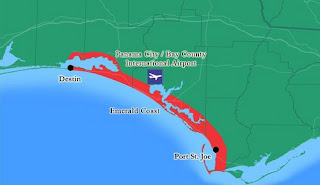 The Clean Water Network today announced it will sue the Panama City-Bay County Airport Authority for alleged stormwater permit violations in April at its new airport.

The proposed airport, being built on a portion of the 4,000 acres of land donated by The St. Joe Co., has been the focus of economic development hopes and environmental controversy for more than six years. The airport lies within a region ranked high among scientists for its biological diversity.

The Florida Department of Environmental Protection last month proposed a legal agreement that would require the Airport Authority to pay nearly $393,849 in fines and settlement costs for 72 water quality violations. But a new consent order proposed by DEP would reduce that amount to $299.649.

Having criticized DEP earlier this month for lax permit enforcement, the Clean Water Network today also blamed the U.S. Army Corps of Engineers for taking a "hands-off approach" to the problems and for allowing the airport to re-route and dredge streams without new permits.

"What we are trying to do is let the Airport Authority know that we are going to do our best to enforce the law" if state and federal agencies will not, said Linda Young, director of the Clean Water Network of Florida.

Airport Authority Executive Director Randy Curtis could not be reached for comment this afternoon. In a May 29 letter to DEP, Curtis said the airport board "takes very seriously its commitment to the environment and to making this airport a net environmental benefit to the state."

A spokeswoman for the U.S. Army Corps of Engineers in Jacksonville said late this afternoon that agency officials who are familiar with the permit were not immediately available.

A DEP spokesman earlier this month said the department investigated and proposed the fines after it received complaints. In documents provided to FloridaEnvironments.com this week, DEP said it proposed reducing the fines despite finding eight new water quality violations at the site since May 19.

The Clean Water Network says the airport construction and lax enforcement have caused ecological devastation in creeks flowing to West Bay. Copies of DEP inspection reports cited by the group today were not immediately available.
Posted by Bruce Ritchie at 6/25/2009 05:52:00 PM

After this story was published, a Corps of Engineers spokeswoman said the agency in May had issued a notice of non-compliance against the Bay County International Airport and Industrial District. The district, according to the Corp was working to implement corrective measures, including installing a silt fence, placing sod and removing sediment from
the wetlands by hand. There were no plans to issue fines against the district, said Nancy Sticht, a spokeswoman for the Corps of Engineers in Jacksonville.

The site is worse than ever. It's now a series of lakes and ponds, with more water coming onto it every day. The emergency fixes are not working, and the next strom will send dirty water and sand into the creeks again. That's because it's hard to get water to run uphill. See Sept 22 09 shots:
http://www.flickr.com/photos/diannehodges/sets/72157622436616914/