Most of Fla. delegation remains opposed to drilling

Florida's two U.S. senators and 22 of its 25 representatives have signed a letter to House and Senate leaders reaffirming their opposition to oil drilling that could encroach upon military missions in the eastern Gulf of Mexico. 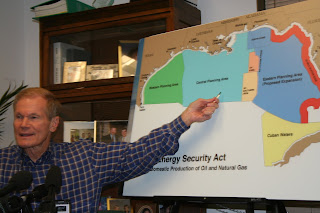 The Senate is considering an energy bill that would allow drilling within 10 miles of Florida's coast, rolling back a prohibition on drilling since 2005, according to Sen. Bill Nelson, D-Fla. He embarked on a tour across Florida earlier this month speaking in opposition to the proposal.

In their letter dated Friday, the Florida senators and representatives said simulator training is not an adequate substitute for live-fire exercises.

"With renewed interest in developing natural gas and oil in the OCS (Outer Continental Shelf), we believe it is again imperative for Congress to reaffirm its authority on this issue," the letter stated. "Therefore we respectfully urge you to include language that protects this important natural asset from encroachment."

Barney Bishop, president and CEO of pro-drilling Associated Industries of Florida, said polls in recent years have shown Florida residents support oil and gas drilling. He said drilling rigs need only be in place only temporarily and he questioned how oil and gas extraction could affect the military.

"These things can all be worked out," Bishop said. "Nothing is white or black anymore. They are all shades of gray. There is just not the will (among elected officials) to do it."