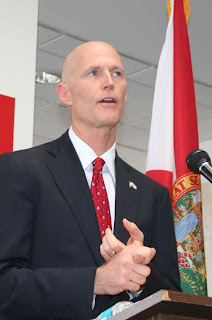 Gov. Rick Scott said Monday he plans to cut $1 billion in government spending over two years by consolidating and streamlining government including the Florida Department of Community Affairs.

Scott's plan -- which included only a few details -- would remove all regulatory functions from DCA and move them to other state agencies. Scott also said he planned to move the collection of alcoholic beverage taxes to the Department of Revenue from the Department of Business and Professional Regulation while moving regulation of drugs and cosmetics to DBPR to the Department of Health.

The governor's press office did disclose that the $1 billion in savings proposed by Scott would also include other consolidations and reorganizations that have not been announced yet. Scott does not have to present his budget recommendations to state lawmakers until Feb. 7. The governor, however, is expected to recommend more than $5 billion in cuts to the entire state budget.

Eric Draper of Audubon of Florida said it sounded like Scott was telling DCA to ignore growth management laws. But Sen. Mike Bennett, R-Bradenton and chairman of the Senate Committee on Community Affairs, said it sounded like the governor was proposing a new mission for DCA rather than dismantling the agency.

Scott has called DCA a "job-killer" despite the fact that the agency approved nearly 600,000 new housing units as requested by local governments. The governor's transition team in December recommended consolidating DCA, the Department of Environmental Protection and the Department of Transportation into a new "Department of Growth Leadership."

Scott made an appearance at The Villages in Central Florida to announce his budget proposal.

"The fact is that Florida burdens job creation with one of the worst regulatory frameworks in the country," Scott said. "To grow jobs we must reduce unnecessary costs that government places on Florida businesses."

Bennett said the governor isn't proposing to eliminate DCA, rather he wants the department, DEP and the state's five water management districts to quit reviewing each others' work.

"I think the governor agrees with me we need a DCA type organization," Bennett said. "The Department of Community Affairs should be enhancing growth and enhancing development. It shouldn't be perceived as a hindrance."

Draper, executive director of Audubon of Florida, said DCA is directed under law to review land-use changes submitted by local governments to ensure protection of natural resources and planning for roads and other services. And Draper said it sounds like Scott is directing the agency to ignore the law.

"Lawlessness is not the solution to job growth," Draper said. "We're not going to grow jobs by saying we're going to ignore our laws."

Gary Fineout of the Florida Tribune contributed to this report.

(Story provided by the Florida Tribune. Story and photo copyrighted by Bruce Ritchie and FloridaEnvironments.com. Do not copy or redistribute without permission, which can be obtained by contacting brucebritchie@gmail.com.)
Posted by Bruce Ritchie at 2/01/2011 08:46:00 AM