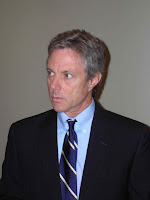 The new chief of Florida's growth management agency on Tuesday made some suggestions that sound like what some statewide environmental groups have been advocating -- an increased focus on long-range planning and less oversight of growth in urban areas.

Gov. Rick Scott has repeatedly called the Department of Community Affairs a job-killer and on Monday his budget recommendations included moving DCA's planners to the Florida Department of Environmental Protection and substantially reducing their numbers.

DCA Secretary Billy Buzzett told a Senate committee on Tuesday that the state should "take the training wheels off" a pair of growth management pilot programs to help the state refocus on its planning priorities.

Ninety-three percent of the approximately 3,000 growth management plan changes submitted by local governments have been approved by the state, Buzzett told the Senate Committee on Community Affairs. That suggests the need for a less "top heavy" approach by the state toward growth management.

He said the Legislature should expand the use of the "alternative state review process" pilot program, created by the Legislature in 2007, to allow statewide participation.

The process reduces the length of time for review by the state and limits the focus of the review to regional issues. The program has been restricted to Jacksonville, Miami, Tampa, Hialeah, Broward and Pinellas counties and the cities within those two counties.

The state, he said, also should require sector planning for areas greater than 5,000 acres to allow a longer planning time frame and provide incentives and predictability for both owners of large landholdings and environmentalists.

"It's a wonderful opportunity for visioning. It's a great opportunity for a true holistic approach for planning," Buzzett said. "I would suggest it's time to take the wheels off that pilot."

Also during the meeting, land-use attorney Nancy Linnan offered a presentation on behalf of a Florida Chamber of Commerce effort to draft a proposal to reform state growth management laws.

The Chamber wants to limit the state's role in the review of local comprehensive growth plans, repeal DCA's rule 9J-5 dealing with growth management and revise the process for amending local plans.

"Essentially we think the top-down process has ended up stifling creativity in the local government," Linnan said. "The folks in Tallahassee -- and I've been one of them quite frankly -- don't know what it's like all over the state."

Charles Pattison, president of the 1000 Friends of Florida, said his group has concerns with some of the chamber's proposals, such as eliminating rule 9J-5 and state comment on local growth plan changes.

1000 Friends, he said, also is concerned that cutting the number of planners at DCA and merging them into DEP will diminish their growth management function. But 1000 Friends and other environmental groups do support shifting the state planning focus and expanding the pilot programs to allow that.

"We don't have any problem with that," Pattison said. "It's consistent with all the recommendations the conservation groups are making."

Asked by reporters whether he will be able to oversee growth management if Scott's budget recommendations are approved, Buzzett said, "I work for the governor and I'm going to do a good job for him -- I think so."

"I think it's really more important -- not me, but what's the state's role in community planning in the future, whether it's DCA or whoever it will be?" he said.