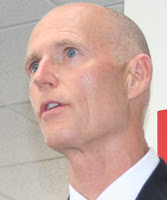 Gov. Rick Scott is warning his supporters that unnamed "special interests" will his attack his 2011-12 budget recommendations and the cuts they include for growth and environmental programs.

Scott proposes substantially reducing the number of state planners who oversee local growth management decisions and would move them to the Florida Department of Environmental Protection. He also recommends no funding for the Florida Forever land-buying program.

"There will be a lot of special interests that complain about the cuts to their favorite programs," Scott said Monday during a "tea party" rally in Eustis, where he unveiled his budget. "We have to remember we are doing this for the sake of our children and our grandchildren to get our state back to work."

The governor also calls on the state's five water management districts to reduce their property tax rates by 25 percent. An implementing bill would require the districts to get approval for their budgets from the governor.

Scott has called the Department of Community Affairs a "job killer." On Monday, he said in Eustis that he will save $120 million over two years by consolidating and reorganizing state government and another $150 million by eliminating programs that are not "core functions" of state government.

"State agencies are not, you know, personal fiefdoms," Scott said. "Just because we have it there today doesn't mean it should be there tomorrow."

The state has purchased more than 2 million acres since 1990 in what has been the largest land buying program in the nation. The Legislature provided $300 million per year for the program from 1990 to 2009 but provided $15 million during the past two years.

While not mentioning the Florida Forever program by name, Scott said, "We can't say we started this (program) five years ago and we are going to keep funding it forever and ever."

Scott also proposes $17 million for each of the next two years for Everglades restoration. The Everglades Foundation noted that the request is down from $50 million received each year for the past four years.

Scott also proposes moving the Division of State Lands from DEP to the Department of Management Services, which manages office buildings and state lands other than conservation lands.

That recommendation suggests that Scott thinks the role of managing Florida's "vast" public lands for people and wildlife is unimportant, said Eric Draper, executive director of Audubon of Florida.

"I would say taking it (Division of State Lands) and putting it over with the people who run office buildings its a recipe for neglect," Draper said.

The Florida Forever program may be just 5 years old, but it replaced other programs much, much older. If protecting water, air and healthy ecosystems isn't for future generation -- what is??

I disagree with the statement that moving it to a department that manasges properties for the state is a recipe for neglect.

It might actually be an improvement over the current system which is actually real neglect.

Many examples abound of acquisitions by the State of properties for environmental preservation that only involved purchasing the land, with no money for maintenance, and certainly no oversight of the properties once they became part of the public domain.