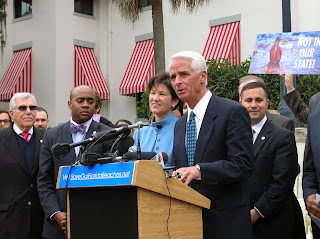 They returned to Tallahassee to announce they will co-chair the petition drive to put a ban on oil drilling on the 2012 election ballot.

As the Deepwater Horizon oil spill sent oil onto Panhandle beaches last July, Crist called a special session of the Legislature to put the ban on the ballot last November. But the House and Senate adjourned without a vote on the issue with Republican leaders saying that a ban was not needed.

Senate President Mike Haridopolos and House Speaker Dean Cannon, who were both drilling advocates, said after the spill they would not allow drilling to be brought up for a vote for the next two years. Both men have said in recent weeks their positions have not changed.

Crist said Wednesday that a ban on drilling in state waters still is needed because drilling remains a threat to Florida's beaches and tourism economy. State waters extend 10.3 miles into the Gulf of Mexico and three miles into the Atlantic Ocean.

"I love Florida, and I know you all do too," Crist said outside the historic Capitol. "And that's why this petition opportunity -- to protect our beaches, to protect our beautiful state, and protect the tourist industry that is so significant to protecting jobs throughout the state of Florida -- is a privilege for me to be here."

Sink said that as CFO during last summer's oil spill, she heard stories that "tug at your heartstrings" from business owners whose livelihoods were threatened because of lost tourism.

"The risk of an oil spill close to our beaches is something we absolutely cannot afford," Sink said.

Rep. Rick Kriseman of St. Petersburg, a House Democratic leader, is sponsoring HB 383, a joint resolution that would put the drilling ban on the ballot. He said he's received no feedback from the Republican leadership on whether they would allow the issue to be brought up.

"If we etch an indelible ban into our state constitution, we forever deny ourselves the possibility of reaping these economic benefits,” said Nicolas Gutierrez, Jr. chairman of FLA Energy Forum. The group's is affiliatd with the American Petroleum Institute, an oil industry trade group.

Drilling ban supporters must collect nearly 700,000 signatures to be put on the ballot and have set a goal of raising $1 million to help with the effort, said Manley Fuller, president of the Florida Wildlife Federation.