Another top Florida DEP official is on the way out 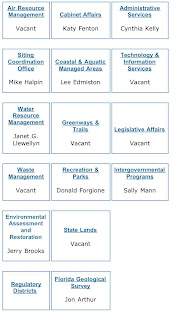 The resignation of another top staffer has been accepted at the Florida Department of Environmental Protection, creating another high-level vacancy under new DEP Secretary Herschel Vinyard.

Janet Llewellyn, director of the Division of Water Resource Management, was told Friday that her resignation had been accepted, according to sources outside of the agency. Resignations were requested from department heads and division chiefs in December during the transition for Gov. Rick Scott.

DEP officials on Monday did not respond to requests for confirmation. A woman who answered the phone in the Division of Water Resource Management said Monday that Llewellyn no longer worked there. Llewellyn, who remained listed in her position on the DEP web site, could not be reached for comment.

Eight other top-level positions at DEP were vacant last week after their resignations were accepted in December. (See list in Jan. 19 story).

Vinyard, a former ship-building executive, began work at the department last Wednesday -- the same day his appointment was confirmed by the governor and Cabinet. Scott told reporters Wednesday that Vinyard still was assembling his leadership team at the department. 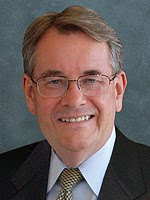 Meanwhile, Sen. Don Gaetz, R-Niceville, told the Northwest Florida Daily News last week that he favors getting rid of, or at least gutting, the Department of Environmental Protection, according to a report.

Gaetz on Monday told the Florida Tribune that he didn't say he wanted to "gut" DEP. "I think we have to look at the functions of DEP and find out where we can combine those with job-creation functions," Gaetz said.

This was expected... what would you do if you had toe get a DEP permit. Dismantle them completely if possible. The new administrator Herschel T. Vinyard, who runs Systems Southeast Shipyards repairs naval ships in Jacksonville, Florida. The Public Employees for Environmental Responsibility (PEER) has filed a petition to the EPA regarding Herschel, since he’s received permits from FDEP as noted in this excerpt:
"The appointment of Herschel T. Vinyard as Secretary of FDEP violates § 304(i) of the Clean Water Act, which expressly prohibits persons employed by regulated dischargers from overseeing state agencies that administer NPDES permitting" (Phillips & Young, 2011) http://peer.org/docs/fl/2_23_11_PEER_petition_to_remove_FL_officials.pdf

Blogs are ideal for creating dialog and community engagement... If you decide that the truth is not important to share then you might remove all comments from your blogs. Or at least reply to posters so we know we are not wasting our time.
Good Luck
erw

My apologies Eric. Somehow your comments and some others were overlooked. I agree they are important to our readers and everyone who is interested in environmental issues. Thanks for sharing your views.