The chairman of the new House Select Committee on Water Policy said Thursday that the state's "local sources first" policy that discourages water pipelines will be reviewed along with the role of water-management districts. But she also said doing away with districts in favor of a statewide water agency would be "crazy."

One of the most controversial aspects of Florida water law is the "local sources first" policy that was added in 1998. It requires the Department of Environmental Protection and the state's five water management districts to evaluate local water supply plans with an eye towards developing more expensive local water supplies as opposed to building pipelines.

Florida is divided by a water flow boundary that extends across the peninsula, creating a water-rich North Florida and a water-poor South Florida. Seventy-eight percent of the state's population lives in South Florida but only 44 percent of the rain falls there, said Michael Kleiner, staff attorney for the House State Affairs Committee. 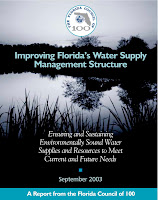 The Florida Council of 100 created an uproar in 2003 when it recommended creating a statewide water authority and revisting the "local sources first" policy in favor of allowing water transfers. Some North Florida residents feared water pipelines would be extended from the region's lakes and rivers to Tampa, Orlando and other cities in Central and South Florida. (See Journal of Land Use article.)

The House Select Committee on Water Policy held its first meeting on Thursday after being created in December by House Speaker Dean Cannon. The committee heard presentations from state agencies on state and federal water law and governance.

There was no discussion among committee members about the local sources first policy. After the meeting, Rep. Trudi Williams, R-Fort Myers and committee chairman, said that the committee still must determine what issues it will take up.

But she told the Florida Tribune that the "local sources first" policy should be reviewed.

"Absolutely, I don't mind looking into that," Williams said. But she said she doesn't think it should touch off fears about water pipelines.

"I'd like to have an open discussion on just about everything that's on people's minds," Williams said. During the committee meeting, she asked the public to submit by Jan. 25 papers on water issues that should be reviewed.

Honey Rand, author of "Water Wars: A Story of People, Politics & Power," said the issue will be as controversial now as it was in 2003 if it is brought up again.

The state's water management districts, established in 1972, have boundaries based on water flow. Williams said she didn't like the idea of replacing those districts with a statewide water board. "That's crazy," she said.

"What's good for the Caloosahatchee (River) is not necessarily good for the St. Johns River," Williams said. "Those basins were drawn because of water flows and they need to stay that way."

Rep. Charles Van Zant, R-Keystone Heights, said during the meeting that the Legislature should approve water-management district budgets and their board members, who are appointed by the governor, should be elected "so they are answerable to the people."

That's been a recurring complaint over the years, and Williams said the committee should take up the issue.

Parts of South Florida are quite water rich. However, they've been slow to adopt reuse and other measures to allocate water in a more intelligent manner. Central Florida has more problems and has been more aggressive.