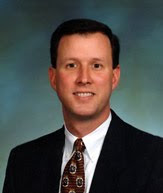 Vinyard thanked Gov. Rick Scott and the Cabinet for the opportunity to serve the state. He takes over a department that lost eight senior staff members last month when the Scott administration accepted their resignations.

Vinyard, who also served as a member of Scott's economic development transition team, recently served as director of business operation for BAE Systems Southeast Shipyards. He also serves on the Jacksonville Port Authority board and on a DEP board that is establishing pollution reduction practices for the lower St. Johns River.

"I look forward to working with each one of you to make Florida a better place to live," Vinyard said.

"Congratulations," Scott said. "You've got a lot of work to do."

Vinyard left the meeting immediately after it ended. In response to an interview request, a department spokeswoman later said he was in meetings.

Asked at an Associated Press forum about the availability to the media of his department appointees, Scott replied many of them had just started their jobs.

"I know the media is important," Scott continued. "But really, their job is to fix these agencies. Herschel just got there. He's got to go over there and figure out his team. That's his first job."

Top officials throughout state government were asked by then-Gov. Charlie Crist to submit resignations in November as part of the transition. The eight at DEP whose resignations have been accepted were:

A department spokeswoman on Wednesday said the vacancies had not been filled.