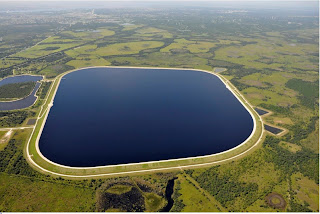 This reservoir in DeSoto County was built with some state water supply funding.


Conservation and development of new water supplies must be part of Florida's future to attract industry and create jobs, panelists on Thursday told the House Select Committee on Water Policy. But there were differing views on how much the environment should be protected.

The committee was created in December by House Speaker Dean Cannon to study water issues over a two-year period and to make recommendations. The panel on Thursday heard presentations on water supply and will hear presentations in two weeks on water quality, said Rep. Trudi Williams, R-Fort Myers and committee chairman.

The panelists on Thursday warned there will be increasing competition for water supplies in the next two years as Florida's population continues to grow.

Florida water use is expected to grow from 7 billion gallons per day in 2010 to 9 billion by 2025, according to a House staff presentation on Jan. 13.

Florida farmers need flexibility in water permitting and assurances that their water supplies won't be taken away for cities and other water users in the future, said Rich Budell, director of the Office of Water Policy in the Florida Department of Agriculture and Consumer Services. He also said that natural systems will be affected.

"We can't do everything we do on the planet and protect every square foot of wetland and river and stream that is out there," Budell said. "There will have to be decisions made in that arena at some point."

Eric Draper, executive director of Audubon of Florida, said there already are estuaries that have been severely altered, including Tampa Bay and the Caloosahatchee River in southwest Florida, because of water use and changes in water flow. Those estuaries, he said, are important to the tourism economy along the Gulf of Mexico.

"It's not just a matter of protecting pristine areas," Draper said. "It's a matter of recovering already-damaged areas."

The Water Protection and Sustainability Program Trust Fund received $100 million for water supply projects in 2005 after it was created. But the fund received no money since 2008, she said.

"We have got to focus back on that," Cory said. "If you are going to do any kind of growth, any kind of economic development in the state, you have to have water."

Representatives of the Florida League of Cities and the Florida Association of Counties said that some of the state's five water management districts now are overstepping their authority and creating frustration with local governments.

Later in the meeting, Rep. Ray Pilon, R-Sarasota and a member of the American Water Works Association, said Florida's water management system is "envied by everybody" across the country.

"We need on this panel to take on the tools we have and the system we have and make it better -- not re-invent the wheel," he said.

There was no discussion Wednesday of the "local sources first" state policy that encourages conservation and more expensive treatment alternatives as opposed to piping water -- a touchy topic in some regions of the state.

Williams said earlier this month she wants her committee to have an open discussion on the policy. But on Thursday she said "it's too early to tell" what the committee will discuss.

(Photo excerpted from House committee packet. Story provided by the Florida Tribune. Story copyrighted by Bruce Ritchie and FloridaEnvironments.com. Do not copy or redistribute without permission, which can be obtained by contacting brucebritchie@gmail.com.)
Posted by Bruce Ritchie at 1/27/2011 08:46:00 PM

Budell says that water used for agriculture shouldn't be taken away for cities. Isn't that one of the functions of the Department of Community Affairs? If Gov. Scott succeeds in dismantling DCA, there won't be anyone in Tallahassee watching out for such things.