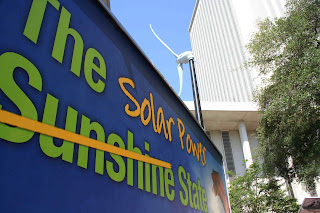 A windmill and billboard promoting solar energy were displayed outside the Capitol earlier this year on Earth Day.

Gov. Charlie Crist got into a flap with House and Senate leaders last week when he said in a letter he was disappointed that the Legislative Budget Commission on Sept. 14 did not authorize spending $51 million in federal stimulus dollars on energy rebates. But Republican legislative leaders said they didn't have legal authority to approve the spending because there were no budget appropriations associated with the rebate programs.

On Thursday, the House Majority Office sent a memo to reporters saying that the Legislature could take up the issue in November or during the 2011 regular session.

Crist had requested $13.9 million for an expired solar rebate program and $17.5 million towards heating and air-conditioning system upgrades as part of a rebate program he announced last month. The solar program, which paid up to $20,000 towards half the cost for solar panels on homes, ended in June with a backlog of at least $50 million after the program ran out of money in June 2009. The state spent $14.4 million federal stimulus dollars in 2009 to pay for rebates.

House Speaker Larry Cretul, R-Ocala, sent Crist a letter saying the governor had announced the $1,500 HVAC program in August knowing that funding had not been approved. He also said the Florida Energy and Climate Commission had been "duping" residents into believing they would receive rebates when money was not available. The governor's office responded that some money was available.

The House Majority Office memo Thursday said Crist had promised money he did not have the legal authority to spend. "This is not an issue of whether or not legislators want to refund Floridians for these rebates that the governor prematurely promised them," the memo said. "The issue is that members of the LBC (Legislative Budget Commission) cannot disregard state law and allow the governor to hand out federal dollars to Floridians in the manner he has requested."

Bruce Kershner, executive director of the Florida Solar Energy Industries Association, said he's concerned that the state may face a deadline for spending the federal stimulus dollars before a special session could be held in November. "We have long advocated that we believe those (solar) rebates should be paid," he said.

Rep. Adam Fetterman, D-Port St. Lucie, sent a letter to Crist and Cretul last Thursday saying that he had received numerous complaints from residents about the solar rebate program and he asked the two leaders to set aside their differences and "do what is right for the people of Florida."

How in the heck is that request an "operating expense?" Nice try, but the better argument is that the Legislature always ignores the law, so why not this time.