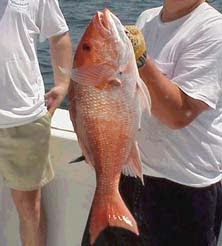 Florida has joined federal authorities in extending the length of the red snapper fishing season in the Gulf of Mexico, partially addressing a contentious issue from earlier this year.

“This is just what the doctor ordered and couldn’t have come at a better time to give a much-needed boost to our Gulf fishing communities that have had a challenging summer, to say the least, because of the Gulf oil spill,” Rodney Barreto, chairman of the Florida Fish and Wildlife Conservation Commission, said in a written statement Thursday.

Recreational anglers and politicians protested earlier this year when the Gulf of Mexico Marine Fisheries Management Council reduced the length of the red snapper season to 54 days in June and July from 75 days in 2009. Federal officials said at the time that the shorter season was needed because recreational anglers had exceeded their allocation in the past.

But the BP oil spill led to the closing of some state waters and much of the federal waters off the Panhandle to fishing this summer. An estimated 2.3 million pounds of snapper remained uncaught because of the lack of fishing, Mark Robson of the Florida Fish and Wildlife Conservation Commission said earlier this week.

Snapper season will be extended to Fridays, Saturdays and Sundays from Oct. 1 to Nov. 22. Rep. Jimmy Patronis, R-Panama City, suggested that to attract visitors to the Panhandle, the state also should extended the free fishing weekends during which fishing licenses are not required.

"I think it's just one other way we can try to put a carrot out there," Patronis said during a state Oil Spill Economic Recovery Task Force meeting on Wednesday. Robson said the suggestion was a good one and would be discussed by agency officials.

On Friday, the National Oceanic and Atmospheric Administration opened more than 3,000 square miles of federal waters off the Panhandle to fishing. That means the closest closed areas now are about 75 miles off of Cape San Blas or 40 miles off the Alabama coast at the Florida state line.