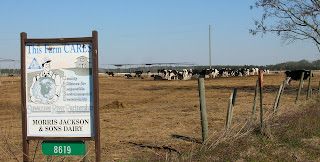 Thirty-six national agriculture groups are asking the U.S. Environmental Protection Agency to delay a proposed action on water quality in Florida and to reconsider its strategy nationally because of the expected costs.

The EPA has proposed numeric limits for nutrients including phosphorus and nitrogen in Florida's rivers, springs and lakes to reduce algae blooms and coastal red tide events. But the federal agency, which is scheduled to adopt a proposal on Oct. 15, faces opposition from state agriculture officials and the Florida Department of Environmental Protection along with utilities, cities and agriculture groups who say the limits will be too costly.

The Sept. 17 letter was sent by national groups including the American Farm Bureau Association, the National Association of State Departments of Agriculture, the National Milk Producers Federation and the U.S. Cattleman's Association. They asked EPA to delay the Oct. 15 action on the proposed criteria for lakes, streams and rivers and to combine it with criteria for Florida estuaries that are expected to be finalized in 2012.

Wastewater utilities in Florida have estimated the cost of complying with the new criteria as $98 billion over 30 years. The Florida Department of Agriculture and Consumer Services has estimated the initial cost for Florida farmers at $3 billion with annual costs at $902 million to $1.6 billion. The EPA has offered the much lower estimate of $130 million plus $11 million per year for agriculture, utilities and other industries.

The criteria being established in Florida will provide a template for EPA to use elsewhere in the nation when setting criteria, according to the letter from the 36 groups. They said the 1998 National Strategy for Development of Regional Nutrient Criteria should be updated to include new science to address concerns about the cost of such regulations.

"The goals of the Clean Water Act must not be set and pursued in isolation from all of the other important goals and priorities of society, including promoting vibrant, strong, job-creating businesses, economically strong communities and productive and valuable use of the land for agricultural and other purposes," the letter said.

An EPA spokesperson said Monday that the agency "is proposing a cost-effective rule to curb the impacts of nutrient pollution that decimates property values and can cause costly illnesses." Earthjustice attorney David Guest, who represents environmental groups in a lawsuit that led to EPA setting a timeline for proposing the criteria in Florida, dismissed what he said are the "phony economic arguments" from the agriculture industry.

(Story provided by the Florida Tribune. Photo and story copyrighted by Bruce Ritchie and FloridaEnvironments.com. Do not copy or redistribute without permission, which can be obtained by contacting brucebritchie@gmail.com.)
Posted by Bruce Ritchie at 9/21/2010 08:57:00 AM